Wearing a cowboy hat under the West Texas morning sun, Jeff Bezos launched to the edge of space. He made the historic flight to space by launching the first unpiloted suborbital flight with a civilian crew.

Just over a week after Richard Branson flew to the edge of space, fellow billionaire Jeff Bezos made a similarly high-stakes trip aboard his own rocket.

Jeff Bezos blasted into space on Tuesday on his rocket company Blue Origin, He became the second billionaire in just over a week to ride his own spacecraft.

The Amazon founder was accompanied by a hand-picked group: his brother, an 18-year-old from the Netherlands, and an 82-year-old aviation pioneer from Texas — the youngest and oldest to ever fly in space. “Best day ever!” Bezos said when the capsule touched down on the desert floor in remote West Texas after the 10-minute flight.

lets see some glims of Jeff Bezos’ trip to space

The group lifted off at 9:12 am Eastern Time from a launchpad in West Texas. The New Shepard’s engines roared to life, and the rocket heaved itself off the ground, screaming through the atmosphere for three minutes. Bezos and his companions were pinned to their seats as the feeling of Earth’s gravity grew three times stronger than normal.

Then the rocket booster separated from the capsule, giving it a final push past the Kármán line – an imaginary boundary 62 miles (100 kilometers) above sea level. The New Shepard suborbital flight to space path was designed to go higher than the Kármán line. It is often considered the boundary of space: about 62 miles above Earth.

A 10-foot-tall capsule with large windows and reclining leather seats detached from the booster and ascend beyond the Karman line 62 miles (100 kilometers) above the Earth. The passengers experience a few minutes of weightlessness and unforgettable views and admire the Earth curving below before gravity began to pull them back down.

Blue Origin’s plan to build a road to space

Beyond its space tourism rocket New Shepard, his company is also working on a massive orbital rocket called New Glenn. It is a stable of next-generation rocket engines and a crewed lunar lander. Bezos emphasized that “reusable space vehicles,” like New Shepard which launches and lands, are key to Blue Origin’s goal.

Bezos revealed what the astronauts spoke about as they were in the capsule ahead of the launch. He told his crewmates that the flight to space is not just about “adventure” but also the start of “something big.”

Road to conquer the space tourism

Just a month after leaving Amazon, Bezos made the historic flight to space onboard Blue Origin’s New Shepard rocket. It’s a sign that having left Amazon, Bezos is dedicating more time to Blue Origin, the space company he founded in 2000. The company’s aim is to transform space travel.

Bezos will therefore be more involved in Blue Origin going forward. The company wants to continue to build more rockets and engines to launch people, and other payloads, beyond Earth’s orbit, and to ultimately conquer the solar system.

Also read: Why Space Tourism Is the Next Big Thing 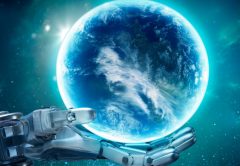