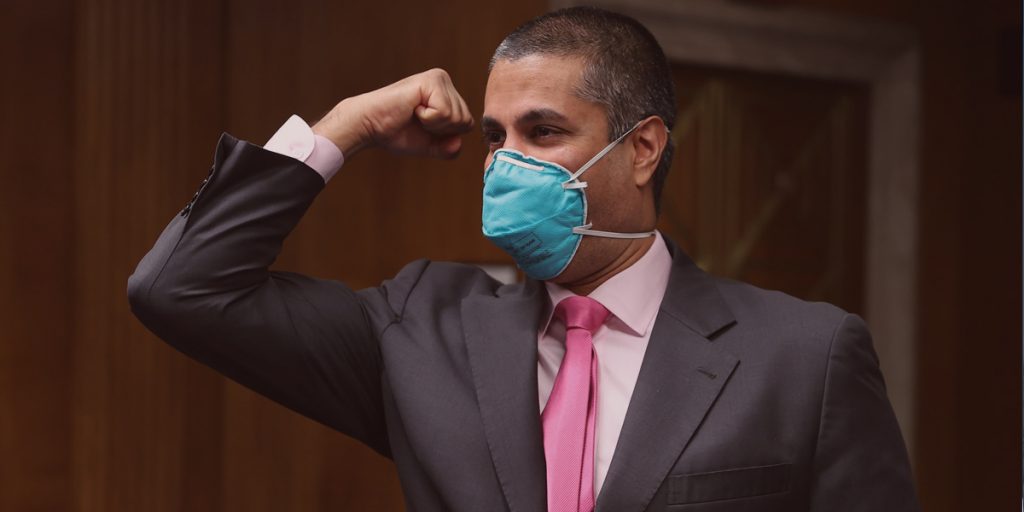 After four years of running the Federal Communications Commission, Ajit Pai is now working for a conservative think tank and a private-equity firm.

The American Enterprise Institute on Friday announced that the ex-FCC chairman “is joining AEI as a visiting fellow” and “will work on issues pertaining to technology and innovation, telecommunications regulation, and market-based incentives for investment in broadband deployment.”

Earlier last week, Searchlight Capital Partners announced the appointment of Pai “as a partner and a prospective board member of a number of Searchlight’s existing investments in the technology, media, and telecommunications sectors.” Searchlight’s current investments include two Internet service providers in the US, Consolidated Communications and Ziply Fiber, and several ISPs overseas.

AEI fellows produce reports and testify in Congressional hearings, so Pai can use his new position to push for further deregulation of the telecom industry. Pai was the FCC chair during the Trump administration, from January 2017 to January 2021, and spent those four years stripping away consumer protections and regulations that Internet service providers and other network operators previously had to follow.

As FCC chair, Pai justified his deregulatory agenda by using faulty data and taking credit for broadband deployments that were planned before he became chairman. Pai claimed that the Title II common-carrier regulations he repealed had prevented broadband-network investment, even though ISPs themselves told investors that wasn’t true. He never raised the FCC’s broadband-speed standard and claimed on his way out of the FCC that Americans still only need download speeds of 25Mbps and upload speeds of 3Mbps.

The AEI’s statement that Pai will work on “market-based incentives for investment in broadband deployment” suggests that he will probably continue making the same types of arguments that deregulation expands broadband access. Pai was also a Verizon lawyer between 2001 and 2003.

“AEI is widely recognized as a place where serious policy analysis and discussions on important policy matters happen, and I look forward to being part of these discussions,” Pai said in the AEI’s announcement of his new position.

“As chairman of the FCC, Ajit Pai developed a well-deserved reputation as a creative thought leader on issues as wide-ranging as broadband policies for closing the digital divide to enabling investment in next-generation networks (5G),” said Ryan Streeter, the AEI’s director of domestic policy studies. “His expertise in these and related topics is a great addition to AEI’s ongoing work on technology policy.”

Searchlight’s announcement that Pai will help shape the firm’s investments said that Pai’s “outstanding accomplishments at the FCC had a material impact on the broadband, wireless, and broadcast sectors, and his deep knowledge will be invaluable in accelerating our efforts in TMT [technology, media, and telecommunications] and digital infrastructure.”

Even before Pai joined AEI, his hiring at Searchlight Capital Partners led former FCC Democrat Michael Copps to say, “We have a serious revolving door problem at the FCC. This is not encouraging.” Copps “said commissioners tend to be more sympathetic to private equity firms and corporations when they are commissioners if they know that they might also, one day, become their future employers,” according to the New York Post.

Pai could take on lobbying roles with Internet providers or trade groups in the future, but he is not allowed to lobby the Federal Communications Commission directly just yet. US law prohibits ex-government officials such as former FCC members from lobbying their former agencies during the first year after they leave government. This restriction does not prevent ex-government officials from lobbying Congress immediately, however. There is also a two-year ban on lobbying government agencies or departments on matters that the ex-official was responsible for during their final year of government employment.

Powell and Baker, like Pai, are Republicans. Democrat Tom Wheeler was a cable and wireless lobbyist before becoming FCC chairman during President Obama’s second term, but he turned against his former employers by imposing net neutrality rules and Title II regulation on Internet providers. Wheeler is now a senior fellow at Harvard Kennedy School’s Shorenstein Center and a visiting fellow in governance studies at the Brookings Institution, and he has been pushing for regulation of the tech industry.

Pai isn’t the only former FCC chair to join a private-equity firm shortly after leaving the commission. William Kennard, a Democrat who chaired the FCC during President Bill Clinton’s second term, went to the Carlyle Group investment firm in 2001. Powell joined Providence Equity Partners in 2005. Democrat Julius Genachowski, Obama’s FCC chair from 2009 to 2013, joined the Carlyle Group in 2014.