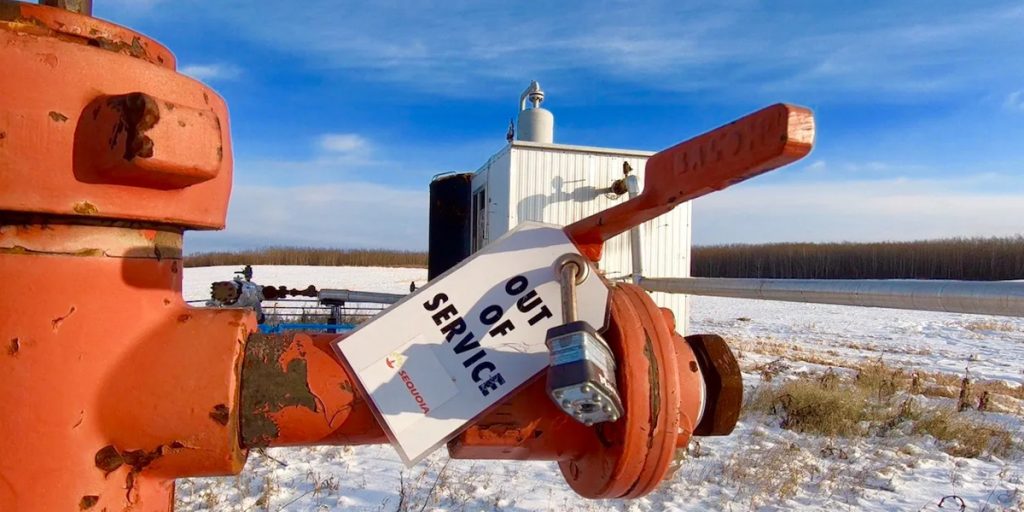 Thousands of dormant oil and gas sites in Alberta could be a “major” economic opportunity in the province, with the potential for many to be repurposed for alternative energy uses, according to a new report.

But it says for such efforts to take off — potentially turning unused sites into geothermal, hydrogen, or lithium recovery projects — the provincial government needs to address the regulatory gaps holding things up.

The report, prepared by the Energy Futures Lab and the Canada West Foundation, calls on policymakers to take legislative action and urges better co-ordination between regulators.

Participants from the oilpatch, new energy ventures, landowners, law firms, and others contributed to the report.

“There are entrepreneurs that are trying to reuse old oil and gas infrastructure for new purposes … and what they’re finding is that there are several roadblocks,” said Julie Rohl of the Energy Futures Lab.

“One of them is just the quagmire of the regulatory environment and how these sites are managed and regulated by several different regulatory bodies.”

Alberta had more than 2,600 orphan oil and gas sites as of April 1, facilities that haven’t been remediated by their often-bankrupt owners. Nearly 3,400 orphan pipelines are needing to be decommissioned.

According to the new report, there are more than 95,000 inactive wells in Alberta.

Such wells can pose an “enormous public financial and environmental liability,” the report says. Last year, the federal government provided Alberta with $1 billion to help clean up the sites.

But the dormant infrastructure also represents a variety of opportunities, the report adds.

“Many — although not all — of these sites are good candidates for repurposing for other energy uses, including geothermal, micro-solar, hydrogen, recovery of lithium or other minerals, or carbon capture and storage,” it says.

For instance, an old well site could be used for a solar project because it may already have road access, lease, a graveled surface, and nearby power lines that it could tie into.

“There’s really an opportunity to try to move a problem forward before it grows any larger and at the same time stimulate other things that we want,” said Marla Orenstein of the Canada West Foundation, a public policy think tank.

“The legislative changes that we’re proposing really set out an opportunity the size of which is almost the same size as the number of inactive facilities that we have in the province.”

That includes new opportunities for oil and gas workers, she said.

But the report says many innovative projects have died due to either inflexible regulations that do not allow for site repurposing and/or difficulties in assigning financial liability.

Among the issues, it cites poor coordination across the regulators, particularly the Alberta Energy Regulator, Alberta Environment and Parks, and the Alberta Utilities Commission.

In one case noted by the report, it took five years for a solar project to navigate all of the regulatory hoops before it could use legacy oil and gas infrastructure to help provide power for irrigation farming.

The report says regulators lack a clear mandate for them to collaborate on such matters. There is a hesitancy by regulators to act when processes or policy guidance is not clear, it adds.

The authors suggest fixing this problem can largely be accomplished if the government directs regulators to collaborate and address the issue by applying existing legislation to new circumstances where interpretation allows.

The report recommends the passage of a legislative “skinny bill,” which states the government will prefer natural resource development to occur on previously disturbed land.

“It clarifies the government’s intention and directs action, but does not introduce additional regulations,” it says.

The report also dives into more specific concerns, ranging from those of landowners, those related to repurposing surface and subsurface uses, plus the tricky issue of transferring liability from an existing licensee.

The report and its recommendations have been sent to the provincial government.

Alberta Energy Minister Sonya Savage said the department is reviewing the report and its recommendations.

“The government continues to work on several priorities raised in the report,” Savage said in an emailed statement.

“We welcome further discussions on these important issues,” Savage said.