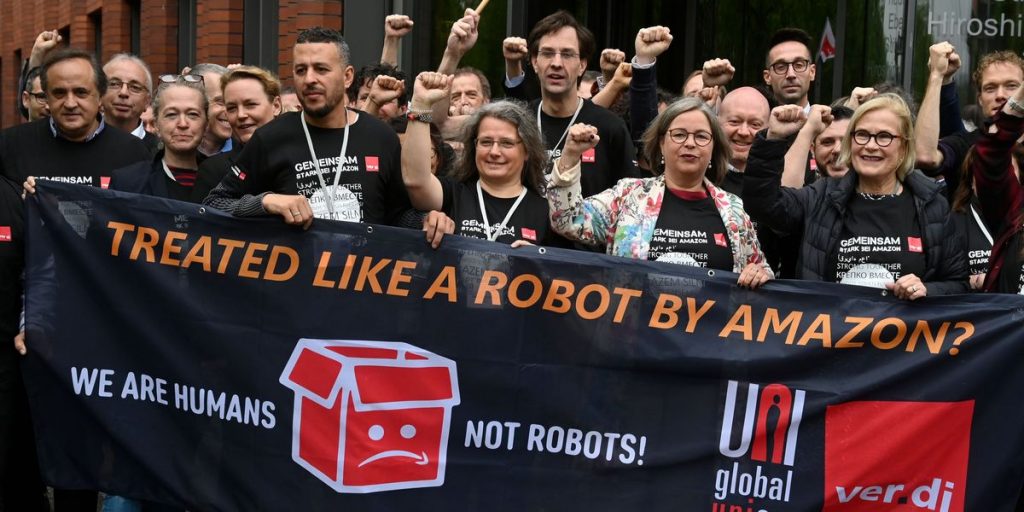 The new controversy centers on Amazon deleting the profiles of hundreds of thousands of entry-level warehouse employees.

Last week, Amazon made changes to its internal online staff directory, deleting hundreds of thousands of entry-level warehouse workers’ profiles from a tool that allows any company employee to view the full names and photos of other employees.

What might seem like a run-of-the-mill company decision has sparked speculation among Amazon’s corporate employees on internal listservs and warehouse workers on platforms like Redditthat Amazon made the change to discourage potential union organizing at its warehouses. Thousands of Amazon warehouse employees in Alabama are currently voting on whether to form a union in the first large US union election in the company’s history. An Amazon spokesperson said the impetus for the move was to focus on improving a different app that warehouse employees use more often, and she declined to comment on the union speculation.

The employee directory in question is known as the Amazon Phone Tool, which allows employees of all levels to do things like search for other employees anywhere in the company, see where they work, and view the hierarchy of managers all the way up to Jeff Bezos. The tool also allows employees to create or accumulate virtual awards and icons for everything from making it through the peak holiday shopping season to acing a quiz about the company’s leadership principles. Previously, all entry-level warehouse workers — known as Tier 1 associates in Amazon parlance — had profiles in this directory and would turn up in search results. But as of last week, Amazon removed them.

Amazon spokesperson Brittany Parmley dismissed the notion that the change is part of some larger scheme, and said the move is tied to beefing up the smartphone app that entry-level employees already use on a daily basis. The app shows workers the name of their manager, and manager’s manager, but does not give them other information about employees at their warehouse or elsewhere in the company.The spokesperson said the company is in the process of adding some of the virtual perks to this app, like the icons and awards that come with a Phone Tool profile.

“We’re simply setting up the right tools for the right jobs,” she said in a statement. “Our front-line employees now have the A to Z app to support their specific needs, and it’s optimized for a mobile-first experience with information about pay, schedules, team structures, company information, and more.”

Amazon front-line workers can access the A to Z app from their own devices. On the other hand, for Phone Tool, workers need to be logged onto Amazon’s internal computer network either from a company laptop, which Amazon doesn’t provide Tier 1 associates, or from a warehouse break room, where company computers are set up. Now, even if a Tier 1 associate accesses this tool, they still won’t be able to see their fellow Tier 1 colleagues.

Some current and former Amazon corporate and warehouse employees aren’t buying Amazon’s reasoning. Several who spoke to Recode said the Phone Tool is one of the only ways for an Amazon employee to search for the names of every worker who works in a given Amazon warehouse.

“It is the easiest way to get a full name and a picture of associates,” a former Amazon warehouse manager told Recode. The former manager requested anonymity for fear of retaliation.

These current and former employees speculated that Amazon wants to prevent workers from passing along that information to outsiders, whether union reps or reporters. With names and photos of all workers, internal or external union organizers could have an easier time contacting workers outside of work to try to build support for unionization.

“It [feels like] a way to reduce and limit the amount of information employees can get about other employees,” the former warehouse manager said.

Others told Recode that it is just another sign that, in their opinion, Amazon views the hundreds of thousands of employees that pick, pack, and ship products as disposable when compared to its white-collar workers. There are the obvious pay disparity and working condition differences between corporate staff and front-line employees, and erasing them from a main staff directory seems to be another reminder of that corporate class structure.

“It treats them even more as disposable and less-than,” a current Amazon white-collar worker told Recode.

Parmley, the Amazon spokesperson, declined to comment on the speculation that the Phone Tool change is linked to union organizing.

At a minimum, though, this episode highlights a yearslong buildup of distrust between segments of Amazon’s workforce and the tech giant’s management team on issues ranging from climate activism to warehouse working conditions.