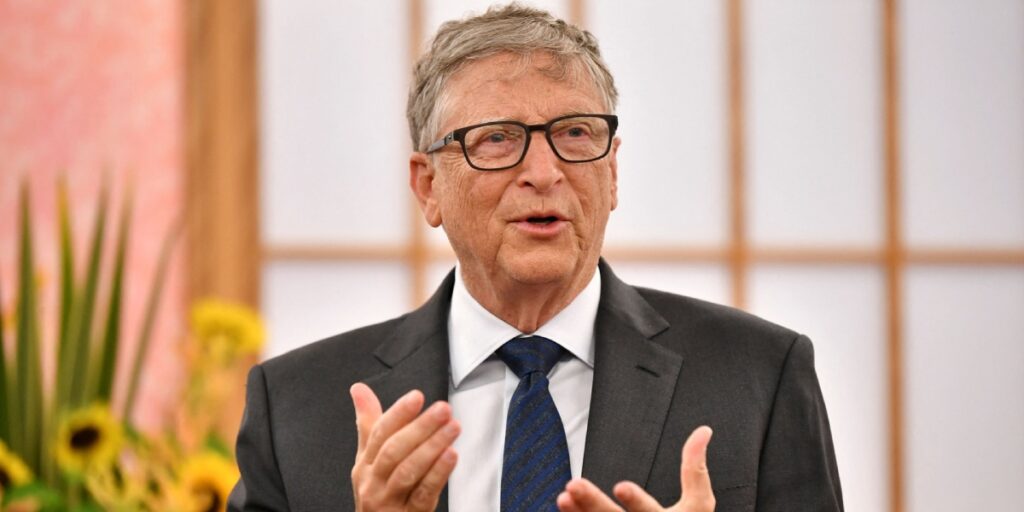 Bill Gates says the global hunger crisis is so immense that food aid cannot fully address the problem. What’s also needed, Gates argues, are the kinds of innovations in farming technology that he has long funded to try to reverse the crisis documented in a report released Tuesday by The Bill and Melinda Gates Foundation.

Gates points, in particular, to a breakthrough he calls “magic seeds,” crops engineered to adapt to climate change and resist agricultural pests. The Gates Foundation on Tuesday also released a map that models how climate change will likely affect growing conditions for crops in various countries to highlight the urgent need for action.

In assigning technology a pre-eminent role in addressing the world’s food crisis, Gates puts himself at odds with critics who say his ideas conflict with worldwide efforts to protect the environment. They note that such seeds generally need pesticides and fossil fuel-based fertilizers to grow.

It’s a debate that could intensify international pressure to meet the shared goals for global prosperity and peace, known as the U.N. Sustainable Development Goals, ahead of a 2030 deadline. The 17 goals include ending poverty and hunger, battling climate change, providing access to clean water, working toward gender equality, and reducing economic inequality.

“It’s pretty bleak relative to our hopes for 2030,” Gates, 66, said in an interview with The Associated Press. He added, though, “I’m optimistic that we can get back on track.”

Gates pointed to the war in Ukraine and the pandemic as the main causes of the worsening hunger crisis. But his message to other donors and world leaders convening for the U.N. General Assembly this September is that food aid won’t be enough.

“It’s good that people want to prevent their fellow human beings from starving when conflicts like Ukraine interrupt the food supply,” Gates writes in the new report. But the real problem, he says, is that many food insecure countries don’t produce enough of their own food — a problem sure to be exacerbated by the consequences of climate change.

“Temperature keeps going up,” Gates said. “There is no way, without innovation, to come even close to feeding Africa. I mean, it just doesn’t work.”

As he has for more than 15 years, Gates called for investment in agricultural research, highlighting corn seeds that thrive at higher temperatures and in drier conditions than other varieties. Those seeds were developed under a program of the African Agricultural Technology Foundation to which the foundation has given $131 million since 2008.

Since then, the Gates Foundation has spent $1.5 billion on grants focused on agriculture in Africa, according to Candid, a nonprofit that researches philanthropic giving. The Bill and Melinda Gates Foundation is by some measures the largest private foundation in the world and is best known for its work on global health, including vaccines. It began in its current form in 2000, after Gates left his CEO position at Microsoft, the tech giant he co-founded. Forbes estimates his net worth to be around $129 billion.

The foundation’s spending on agricultural development is why Gates’ view on how countries should respond to food insecurity has taken on heightened importance in a year when a record 345 million people around the world are acutely hungry. The World Food Program said in July that the tally represents an increase of 25% from before Russia invaded Ukraine in February and a 150% jump from before the pandemic struck in the spring of 2020.

In Ghana, field trials for four varieties of modified seeds began in 2013. But only this past summer has one been approved for commercialization, said Joeva Rock of the University of Cambridge. Activists there, she said, have asked whether those resources could have been better spent elsewhere.

“What would happen if those went into increasing funds to the national research centers in Ghana, to building roads, to building storage, to building silos or helping to build markets?” said Rock, who has written a book about food sovereignty in the country.

When asked, Gates acknowledged the importance of infrastructures like roads and other transportation systems.

“If you want your inputs like fertilizer to come in, if you want your output to go out, it’s just too expensive in Africa without that infrastructure,” he said, adding that building and maintaining roads is highly expensive.

Some researchers question the wisdom of pursuing the fundamental premise that Gates has embraced: Increasing agricultural production through the use of modified seeds along with fertilizers and pesticides. They point to the environmental footprint of industrial agriculture, including the use of fossil fuel-based fertilizers, the degradation of soil quality, and the diminishing of biodiversity.

Alternatives could include agroecological interventions, like developing locally managed seed banks, composting systems to promote soil health, and pesticide interventions that don’t rely on chemicals, experts said. Over time, those approaches can reduce the need for food aid and build more resilient farming systems, according to Rachel Bezner Kerr, a professor of global development at Cornell University.

Kerr, a lead author of the food chapter of the latest report from the International Panel on Climate Change, said that while the panel doesn’t make recommendations, “overall, the kind of focus on a few technologies and reliance on fossil fuel-based inputs isn’t in line with ecosystem-based adaptation” or a biodiverse future.

“Fertilizer is necessary. You simply cannot meet the overall productivity gains without it,” Suzman said, speaking on a call with reporters.

In his interview with the AP, Gates himself dismissed criticisms of the foundation’s emphasis on modified seeds.

“If there’s some non-innovation solution, you know, like singing ‘Kumbaya,’ I’ll put money behind it,” Gates said. “But if you don’t have those seeds, the numbers just don’t work.” He added, “If somebody says we’re ignoring some solution, I don’t think they’re looking at what we’re doing.”

Another project the foundation has funded is the development of computer models that try to measure crop loss caused by disease or pests. The idea is to direct research and responses to where they are needed most.

“It’s not just, how do we get through this crisis and get back to normal? It’s, what does the future normal look like?” said Cambria Finegold, the director of digital development for CABI, an intergovernmental nonprofit that is developing the models.

Melinda French Gates, the other co-chair of the Gates Foundation, highlighted in a separate letter the halting progress toward gender equity worldwide. Since January, the foundation has expanded its board, adding six new members to help direct its work, a move that followed the announcement of the Gateses’ divorce last summer.

French Gates agreed to step down after two years if the two decided they could not continue to work together. French Gates, who also founded an investment organization called Pivotal Ventures, was not available for an interview.

Gates said he is lucky that his former wife has continued to put her time and energy into the foundation. In July, Gates said he would contribute $20 billion to the foundation in response to the significant setbacks caused by the pandemic, raising its endowment to approximately $70 billion.

Through his giving, investments, and public speaking, Gates has held the spotlight in recent years, especially on the topics of vaccines and climate change. But he has also been the subject of conspiracy theories that play off his role as a developer of new technologies and his place among the highest echelons of the wealthy and powerful.

Gates said he does not spend time thinking about conspiracies and that his foundation’s work has nothing to do with his personal reputation.

“If you go into these countries, they’ve never heard of me or the foundation,” Gates said. “Maybe in the rich world somebody is reading some internet thing, but the people we care about have never, will never, and it’s not important that they ever know who I am.”