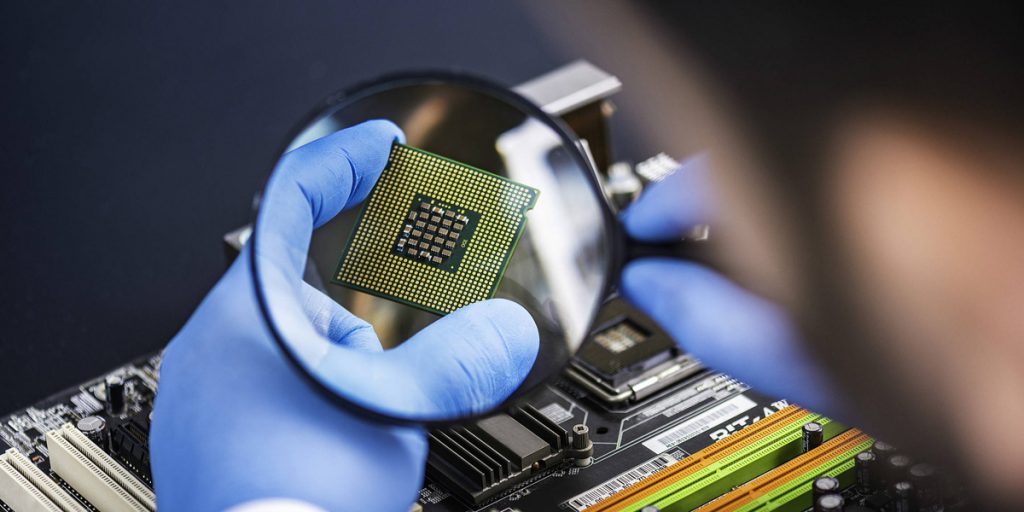 China’s technology giants have been pushing to develop their own semiconductors or chips, a move seen as progress toward China’s goal to become self-reliant in critical technology. In reality, China is still a long way off even if it’s one step closer to self-sufficiency, according to one expert, adding that the country is still heavily dependent on foreign technology and lagging in the so-called leading edge part of the chip market. Semiconductors are key components in everything from smartphones to modern refrigerators to cars. They’ve also become a key focus of the broader technology battle between the U.S. and China. The world’s second-largest economy has for years invested heavily into boosting its domestic chip industry, but it has struggled to catch up with rivals in the U.S. and other parts of Asia. Increasingly, semiconductors are seen as key to national security for many countries and a sign of technological prowess. There’s been a slew of announcements from major Chinese technology companies this year regarding chips made in China. In August, Baidu launched Kunlun 2, its second-generation artificial intelligence chip. This week, Alibaba released a chip designed for servers and cloud computing. Smartphone maker Oppo is also developing its own high-end processors for its handsets, the Nikkei reported on Wednesday.

While these companies are designing their own chips, they might still have to rely on foreign tools to do so. But when it comes to manufacturing and the broader supply chain, China’s internet giants are still heavily dependent on foreign companies. “This is a step in becoming more self-sufficient in semiconductors but a small one,” Peter Hanbury, a partner at Bain & Company, told CNBC by email. “Specifically, these are examples of locally designed chips but a lot of the IP [intellectual property], manufacturing, equipment, and materials are still sourced internationally.” The reason these companies are designing their own chips is that they can create semiconductors for specific applications so as to differentiate them from their competitors.

A closer look at the specifics of the silicon being designed shows China’s reliance on foreign companies. Take Alibaba’s new Yitian 710 chip. That is based on architecture from British semiconductor firm Arm. It will also be built upon the so-called 5-nanometer process, the most advanced chip technology at the moment. Baidu’s Kunlun 2 chip is based on the 7-nanometer process. Oppo meanwhile is reportedly working on a 3-nanometer chip. This is where the challenge lies for China. The country does not have a company capable of manufacturing these leading-edge semiconductors of these sizes. They will have to rely on just three companies — Intel from the U.S., TSMC from Taiwan, and Samsung in South Korea. China’s largest chip manufacturer SMIC is still years behind its companies in terms of manufacturing technology. But it’s not just manufacturing. Even companies like TSMC and Intel rely on equipment and tools for the manufacturing process from other companies. In that area, power is concentrated in the hands of a few: ASML, a company from the Netherlands, is the only company in the world capable of making a machine that chip manufacturers need to make the most advanced chips. “The semiconductor ecosystem is large and complex, so building self-sufficiency is very difficult across such a broad range of technologies and capabilities,” Hanbury said. “In general, the most challenging area to build self-sufficiency will be the leading edge. Here, the challenge is you need both investment dollars, but you also need to overcome the massive requirements around technical expertise and accumulated experience.”

The reliance on foreign companies leaves Chinese firms vulnerable to any geopolitical tensions — as was the case with both Huawei and SMIC. Huawei designed its own smartphone processor called Kirin. The chips were usually based on the latest technology and helped the Chinese smartphone giant become one of the biggest smartphone players in the world. However, the U.S. put Huawei on a trade blacklist called the Entity List in 2019 which cut off the Chinese company from certain U.S. technology. Last year, Washington introduced a rule which requires foreign manufacturers using American chipmaking equipment to get a license before they’re able to sell semiconductors to Huawei. Huawei’s chips were manufactured by TSMC. But when the U.S. rule was introduced, TSMC could no longer make semiconductors for Huawei. That crippled its smartphone business globally. SMIC is also on the U.S. blacklist which restricts its access to American technology. These sanctions could be a concern for Chinese companies now developing their own chips. “For example, if there was an effort to block the shipment of smartphone processors then Oppo, for example, would have a domestically designed source of chips,” Hanbury said. “However, most of these chips are still manufactured using international technology so they could still lose access to their chips if the manufacturing partner for these chips were blocked from manufacturing.”

Governments around the world now see semiconductors as an extremely strategic and important technology. U.S. President Joe Biden has called for a $50 billion investment in semiconductor manufacturing and research and has looked for chipmakers to invest in the country. In March, Intel announced plans to spend $20 billion to build two new chip factories, called fabs, in the U.S. “This is about out-competing China,” Commerce Secretary Gina Raimondo told CNBC in March. Washington has looked to bring semiconductor manufacturing back to the U.S., seeing it as key for national security, given the supply chain is very concentrated in Asia. But like-minded nations are also trying to work together to ensure their semiconductor supply chains are secure. Leaders of the United States, India, Japan, and Australia, a group known as the Quad, announced plans in September to establish a semiconductor supply chain initiative aimed at identifying vulnerabilities and securing access to semiconductors and their vital components. A lot of the recent discussion on semiconductor supply chains was sparked by a global chip shortage that has hit industries from autos to consumer electronics, and worried leaders about their countries’ ability to secure semiconductors when required.

So where is China now?

China may be ahead of its peers in some areas of chip development, but it will find difficulty catching up with cutting-edge technology, at least in the short term. For example, SMIC can manufacture 28-nanometer chips on a large scale. These could be used in TVs or even autos — an area China could do well in, particularly with the current shortage of semiconductors. However, to put things in perspective, TSMC is already working on 3-nanometer technology. SMIC would have to master the manufacturing processes that TSMC has been doing for years before being able to catch up. “So even moving quickly forward across these existing technologies would not be enough to catch up and reduce reliance at the leading edge because the leading edge is constantly moving forward,” Hanbury said. “It’s like running a race to catch a really fast runner while that runner is quickly running away from you.”