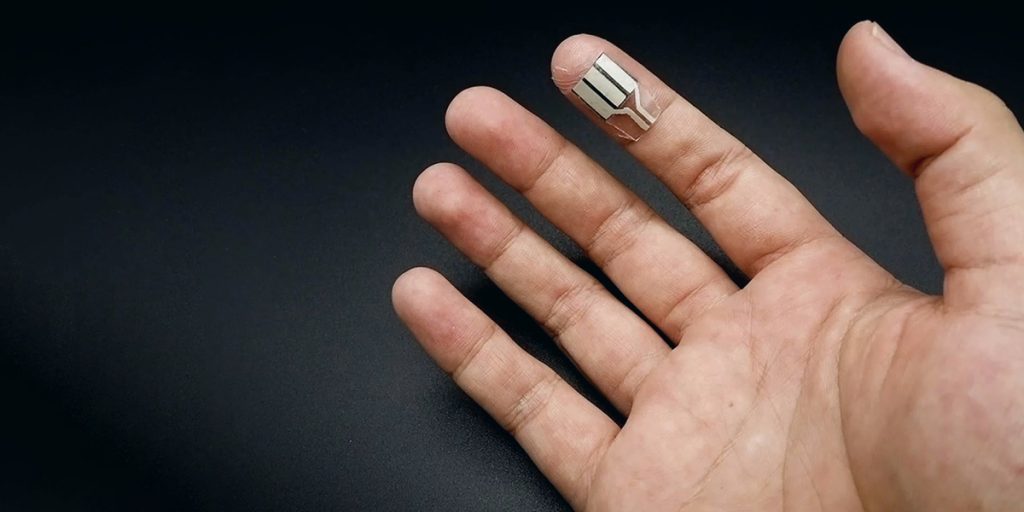 Wearables are so hot right now, with consumers scooping up more than 100 million units of smartwatches, fitness trackers, augmented reality glasses, and similar tech in the first quarter of 2021 alone. Sales in the category increased 34.4 percent in the second quarter from Q2 2020, making it one of the fastest-growing categories of personal electronics. That rise comes with an increased demand for practical and efficient energy harvesters capable of continuously powering those wearables. Now, a team of engineers at the University of California San Diego has designed a new type of biofuel cell that harnesses energy from the sweat of your fingertips, according to a recent paper published in the journal Joule. The cell can also be integrated with piezoelectric generators to harvest energy from the pressing of the fingertip. The breakthrough could one day make it possible to power up your wearables as you type or sleep.

Most wearable electronics these days are powered by tiny electrochemical storage devices like batteries and supercapacitors, but these are limited in how long they can power the electronics over extended use. In addition to finding clever ways to further reduce the energy consumption of such devices, researchers are looking at energy harvesters as a promising potential solution. Some existing self-powered sensors successfully reduce energy consumption, per the authors, but those devices are unable to power the required signals for efficient data transmission. So there is considerable interest in developing self-sustaining harvesting systems that draw energy from sunlight, body movements, biofuels, or temperature gradients (i.e., good old-fashioned thermodynamics). Each type has its limitations. The sun isn’t always shining, for instance, and thermoelectric devices need a temperature difference between the wearers and their surroundings. And the harvesters that rely on body movements typically require vigorous exercise to extract the needed energy.

The main challenge facing all these novel power sources is a metric called energy return on investment (EROI), which is basically the ratio between how much energy is actively invested in a system that would not otherwise be required and how much energy is ultimately harvested. An energy harvester that relies on movement, for instance, harnesses less than 1 percent of all the energy a person puts into the device through vigorous exercise. Ideally, you want an energy harvester that relies on passive constant input from the human body. “Normally, you want maximum return on investment in energy. You don’t want to expend a lot of energy through exercise to get only a little energy back,” said co-author Joseph Wang of UCSD, whose lab developed biofuel cells that draw energy from the high concentration of lactate in human sweat eight years ago. “But here, we wanted to create a device adapted to daily activity that requires almost no energy investment—you can completely forget about the device and go to sleep or do desk work like typing, yet still continue to generate energy. You can call it ‘power from doing nothing.'”

In fact, according to Wang et al., their device boasts the most favorable EROI yet for bioenergy harvesters. They believe it represents a paradigm shift from what they call “work for power” to “live to power.” Their secret: the passive perspiration known as fingertip sweat. Our hands and fingers produce a lot more sweat than we realize because our fingers are constantly exposed to air, allowing any sweat to quickly evaporate. In fact, fingertips have the highest concentration of sweat glands anywhere on the human body, including under the arms. Fingertips produce sweat at rates as high as a few microliters per centimeter. “Even with the minute amount of sweat compared to the sweat you got from a really intense workout, this power is still very sizable,” co-author Lu Yin told New Scientist. “No matter how clean your hand is, it’s very easy to leave your fingerprint everywhere. That’s basically the residue of your sweat, with a lot of metabolites. What we did is to take advantage of this.”

The new UCSD biofuel cell is a thin, flexible strip that wraps easily around the fingertip like a Band-Aid. There is a pad of electrodes made out of carbon foam and a hydrogel that absorbs any sweat. Enzymes in the electrodes then trigger chemical reactions between the lactate and oxygen molecules in the sweat to produce electricity. The researchers next added a piezoelectric chip so that even more energy could be produced just by pressing one’s fingertips against an object. That energy is then stored in a small capacitor until it is needed. The UCSD team found that their biofuel cell could produce nearly 400 millijoules of energy per square centimeter (sufficient to power an electric wristwatch for 24 hours) as a test subject slept for ten hours. An hour of light typing or clicking on a mouse produced nearly 30 millijoules from a single fingertip. Adding strips to the rest of the fingers could potentially produce ten times more energy, making for a great return on energy investment. “When you are sleeping, you are putting in no work,” said Yin. “Even with a single finger press, you are only investing about half a millijoule.”

To demonstrate the practicality of their device, the UCSD researchers connected their biofuel cell to a chemical sensor with a small, low-power electrochromic display that provides a readout of the data collected by the sensor. They connected the system to a subject in order to monitor their Vitamin C level after taking a supplement. Another experiment involved powering a sodium sensor to monitor how many sodium ions were in a sample of saltwater. The researchers found that both the sensor and the display could be powered by pressing the device ten times every ten seconds or by simply wearing the strip on the fingertip for two minutes. The next step is to improve on this novel biofuel cell’s efficiency and integrate it with other kinds of harvesters for specifically targeted situations. The hydrogel component might also be improved for better durability and moisture retention overextended repeated operation. “Such highly efficient, user-friendly, biocompatible energy-harvesting technology, coupled with the system integration and corresponding judicious energy budgeting, offers considerable promise for establishing self-sustainable, reliable, and independent next-generation epidermal electronics systems for tracking healthcare and wellness,” the authors concluded.