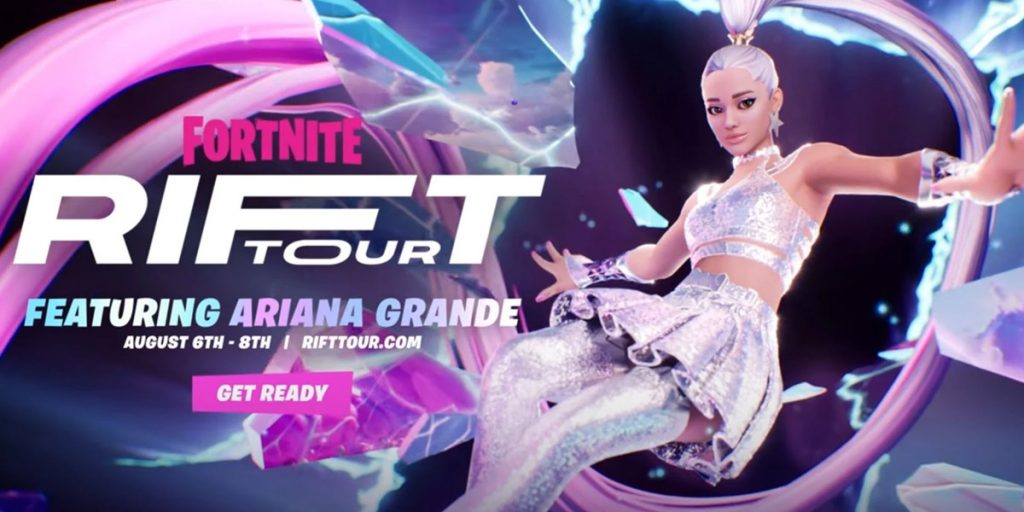 Epic announced today that Ariana Grande is the next big musician who will be teleporting into the virtual world of Fortnite in a series of concerts starting next week.

Ariana Grande is headlining a series of concerts as part of something called “Fortnite Rift Tour.” Players will be able to log on to see Grande’s digital avatar performing across five performances spread across different days and times.

Here’s the schedule for the event:

Epic says this schedule was created to allow fans around the world multiple chances to see the famous pop star perform. It also recommends players show up an hour before the event begins. The rift tour event playlists will go live 30 mins before each performance. In the past, Fortnite events like this have suffered from server issues leading to delays and some players being locked out of events.

“From August 6-8, take a musical journey into magical new realities where Fortnite and Ariana Grande collide. Dive into the Rift Tour.”

Grande isn’t the first big name musician to show up in Fortnite. Famously Travis Scott performed in the game via a large hologram that transported players around the map. EDM artists like Marshmello and Deadmau5 have also performed in the game, often during large party-like events where players are unable to shoot or attack each other.

As with previous events, players who join will be able to earn exclusive bits of gear and cosmetics for watching and completing quests.

This Ariana Grande Rift Tour had been rumored for weeks now, with some leaks popping up over the last few days that seemingly confirmed the news.

Currently, Fortnite is in the middle of its alien-themed 7th season, Invasion. This season added famous aliens and sci-fi characters like Superman, Rick from Rick and Morty, and flyable UFOs. The season is expected to end sometime in September.