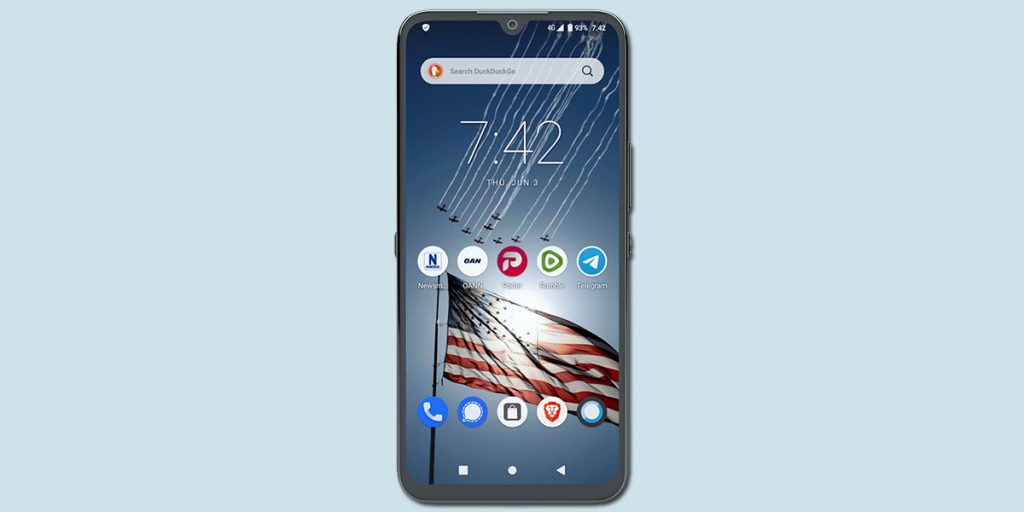 Most of us have an “it’s complicated” relationship with our phones when it comes to privacy and social media. A new handset called the Freedom Phone promises to prioritize “free speech and privacy” above anything else. You might assume that the Freedom Phone follows the trend of phone-makers like Apple making it harder for your data to be shared unwillingly, and for companies to track you. The website for the Freedom Phone, which has no fewer than 10 “buy” buttons, states, “Not just making America great. But also making a great phone.” Clearly the Freedom Phone is saturated in politics.

If you’re looking for a phone that protects your privacy, look somewhere else. The Freedom Phone has a lot of red flags.

In a launch video, self-proclaimed “bitcoin millionaire” Erik Finman, who is funding the phone, claims that Freedom OS protects your privacy and has an “uncensorable” app store. The PatriApp store claims to feature apps banned by “Big Tech.” In the video, Finman shows off a phone that is powered off and looks similar to a budget Chinese phone that sells for one-quarter of the Freedom Phone’s $500 price. He doesn’t share basic specs or technical details about the phone — like if it works on the faster 5G data networks every US carrier is rolling out.

The Freedom Phone and its politically conservative branding will appeal to many. But there is nothing to suggest that the phone, its privacy claims or avoidance of “Big Tech” work the way Finman suggests. Since the announcement, numerous publications and privacy experts have raised questions and security concerns about the phone and whether Finman is being entirely forthright with potential buyers.

The fact the phone is already available to order — and that there are more buy buttons on the website than phone hardware specs describing the phone’s capabilities — are all red flags. The phone is marketed entirely on its politically conservative branding and seems like nothing more than a savvy entrepreneur looking to make money from conservatives frustrated with Facebook and Twitter banning former President Donald Trump. I contacted Freedom Phone and Finman for comment and to get more information about the phone.

I also ordered a Freedom Phone for testing, but don’t recommend you buy it at this time.

What is the Freedom Phone?

It’s a new phone that promises to protect your privacy and allow free speech without censorship across the device. In his promotional video, Finman says that the Freedom Phone “does everything your current phone does except censor you or spy on you.” He says it’s comparable to the best smartphones on the market. He goes on to state that everyone is complaining about “Big Tech censorship” but no one is doing anything about it. On screen in the video, a generic tweet is shown that’s dated Dec. 18 and attributed to Twitter user “@twitteruser” that reads, “BUILD YOUR OWN PHONE!” To which Finman replies, “So, I did.” The Twitter account shown is a real address whose last post is dated Nov. 5, 2013.

Does the Freedom Phone actually work?

We don’t know. In the launch video, the phone remains powered off the entire time. That could indicate that the software isn’t ready for viewing. We asked Freedom Phone for more details.

Why is the Freedom Phone controversial?

Any time a handset vendor makes claims about a phone’s features, it falls to the company to demonstrate and explain how those features work. The Freedom Phone’s website, launch video and Finman’s posts on Twitter give few details about the phone or how its protections work. The absence of technical details and the fact that the company is already accepting money for preorders heightens our skepticism that the company will be able to meet those orders as well as its lofty privacy claims.

How much does the Freedom Phone cost?

Is the Freedom Phone just a rebranded $120 Chinese Android phone?

The Freedom Phone has the tagline: “Made for conservatives by conservatives.” Turns out it’s actually made by a Chinese company called Umidigi that’s based in Shenzhen City. In an interview with The Daily Beast, Finman confirmed that Umidigi made the Freedom Phone but didn’t specify which Umidigi phone design is used.

Matthew Hickey, a cybersecurity expert who co-founded Hacker House, told the Daily Dot that the Freedom Phone is a Chinese phone called the Umidigi A9 Pro that can be bought from AliExpress for as little as $119. He said that the A9 Pro is sold in bulk with custom logos and branding.

In a tweet, Finman wrote, “We designed this between my design lab and our partner in Hong Kong to make a phone that is custom.”

Should I buy a Freedom Phone?

No. Even if all of Finman’s claims about the Freedom Phone turn out to be true, it’s best to wait until devices are available to test the company’s claims.

Is the Freedom Phone a scam?

Finman hasn’t explained how the phone works, or how it protects your privacy or free speech. Despite the claims so far, the Freedom Phone’s basic technical and software details are absent, which gives customers very little to go on. While I can’t outright call it a scam, I would approach this handset with caution until it’s available for testing.

What makes the Freedom Phone secure?

Finman says that the phone won’t track your apps, your keystrokes or your location, but he doesn’t explain how. The phone’s Freedom OS has a security privacy guard called Trust.

“With powerful tools such as Trust, you are in control of what your apps can do whenever you want. Trust will help you understand the security of your device and warn you about possible threats.”

We have never heard of Trust. It might be something Finman’s team developed. Again, there aren’t any details on how it works or where it came from. It isn’t clear if Freedom OS is based on Android. And just a reminder that “Big Tech” company Google makes Android.

Google frequently updates Android with software upgrades and security patches which this phone likely wouldn’t get.

What makes the Freedom Phone ‘uncensorable’?

The website says the Freedom Phone has an “uncensorable” PatriApp store offering apps banned by the Google Play store and iOS App store. What’s unclear is if there are policies in the PatriApp store that protect against illicit criminal activity, hate speech, graphic and sexual material or pedophilia. Is the PatriApp store basically like the 4chan of app stores?

It also isn’t clear how the phone would handle technical details like IP tracing, website cookies or other conventional tracking tools used on phones and other electronic devices. We don’t know if the Freedom Phone has received clearance from the FCC.

What carriers does the Freedom Phone work on?

The Freedom Phone website states it will work with “Verizon, AT&T, T-Mobile & Sprint, and all other domestic and international carriers.” Listing Sprint is curious because, in 2020, T-Mobile officially closed its $26.5 billion merger with Sprint.

How does the Freedom Phone protect against carrier tracking?

It’s unclear, and the issue isn’t addressed on the Freedom Phone website.

If the Freedom Phone avoids ‘Big Tech’, why does it work on all of the major US carriers?

This is also unclear. In Finman’s promo video, “Big Tech” is largely used in the context of Twitter and Facebook banning former President Trump after he used his accounts to whip up a mob that invaded the Capitol on Jan. 6.

When can you order a Freedom Phone?

The Freedom Phone is available to preorder now. We strongly recommend you don’t order it.

When does the Freedom Phone ship?

Units of the phone are said to arrive in August.

Where can you buy a Freedom Phone?

At this time, only on the Freedom Phone website.

What apps does the Freedom Phone run?

The website shows icons for Parler, NewsMax, OANN, Rumble, the DuckDuckGo web browser and Telegram encrypted messaging. But it’s unclear if it will be able to run productivity apps like Microsoft Word or Adobe Acrobat, social media apps like TikTok or Snapchat, dating apps like Tinder or Grindr, or video games.

What are the specs for the Freedom Phone?

It has a 6-inch screen that Finman says is edge-to-edge. In the video, he never shows the display powered on running Freedom OS. Photos show a dual-SIM card tray with a spot for expandable storage. Aside from Finman saying things like “great camera,” “comparable to the best smartphones on the market” and a “super fast processor,” the specs are unknown.

Is the Freedom Phone ‘comparable to the best smartphones’ as Finman claims?

We have strong doubts. The design shown in the video looks like dozens of budget Android phones we’ve seen over the years. It doesn’t look high-end. The screen has a teardrop cutout for the selfie camera, which is a design choice many Android phones had three years ago.

According to its website, Freedom Phone is owned by Finman, LLC in Cheyenne, Wyoming. Eric Finman is listed as the company’s agent and organizer.

Finman grew up in Idaho. In 2013, at the age of 14 he allegedly bought 100 Bitcoin ($1,000) which, by the time he was 20, was worth more than a million dollars. In 2017, he founded the education startup, Botangle. In 2019, he invested in a cryptocurrency company called Metal Pay to be a competitor against Facebook’s upcoming Libra cryptocurrency (now called Diem).