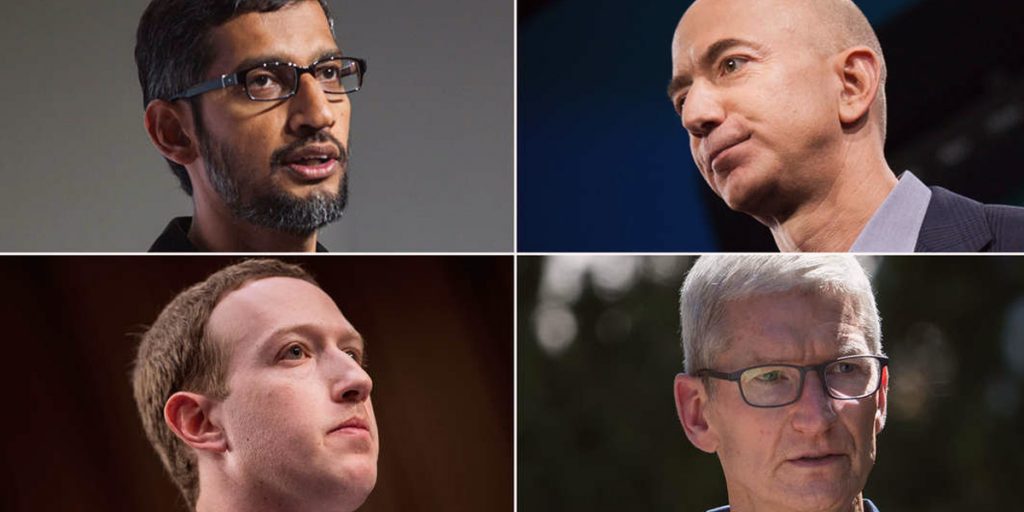 Tech giants including Amazon, Apple, Facebook and Google could be forced to make sweeping changes to their businesses under a series of new bills introduced Friday by House lawmakers targeting the companies’ economic dominance.

If successful, the legislation could force Google to stop promoting YouTube in its search results, or prohibit Amazon from selling products on its marketplace that compete directly with third-party seller listings. Apple could be required to relax its restrictions on iOS app developers, and Facebook could be banned from acquiring nascent companies for the purpose of stifling future rivals.

The most aggressive of the five bills, which addresses concerns about tech giants using their control over multiple business lines to favor their own products or to suppress rivals, opens the door to breakups of the companies if they don’t comply.

“For example, a search engine could not own a video service that it has incentives to favor in search results,” according to press material provided for the proposed legislation. “In such instances the bill requires dominant platforms to divest lines of business where the platform’s gatekeeper power allows it to favor its own services or disadvantage rivals.”

The bills do not name specific companies. But virtually every legislative proposal seeks to respond to the findings of a 16-month investigation of the tech industry conducted by the House Judiciary Committee’s antitrust panel. That investigation concluded, in a landmark report, that Amazon, Apple, Facebook and Google enjoy monopoly power and have abused their position in varying ways at the expense of fair competition.

“Right now, unregulated tech monopolies have too much power over our economy,” Rep. David Cicilline, the subcommittee’s chairman, said in a statement. “They are in a unique position to pick winners and losers, destroy small businesses, raise prices on consumers, and put folks out of work. Our agenda will level the playing field and ensure the wealthiest, most powerful tech monopolies play by the same rules as the rest of us.”

The large tech companies have previously denied engaging in anti-competitive conduct. They argue they compete fairly, and provide products and services that have greatly benefited consumers.

The proposed legislation prompted praise from Big Tech critics and smaller rivals. Roku, the streaming device maker that competes with several of the largest tech companies, said Friday that an “aggressive set of reforms is needed to prevent a future where these monopolists further abuse consumer choice and hamper access to innovative and independent products.”

Tech industry advocates say the proposed bills would lead to dramatic changes for consumers. The bills would potentially outlaw practices such as the ability to see YouTube videos in Google search results, or free shipping on Amazon Prime for select products, Adam Kovacevich, founder and CEO of the Chamber of Progress, an advocacy group backed by Amazon, Facebook, Google and others, wrote ahead of the bills’ introduction.

Each of the bills is being spearheaded by multiple committee Democrats and at least one Republican, according to congressional aides. The bipartisan cooperation highlights how the techlash has become one of the rare issues that can unite both sides of the aisle, though the two parties sometimes disagree about diagnosing the most pressing problems from Silicon Valley.

“There’s not much Republicans and Democrats agree on these days, but we agree we need to tackle this crisis,” one of the aides said.

The package does not include any provisions addressing Republican claims of perceived anti-conservative bias from online platforms, the aides said, in part because online content moderation is not within the committee’s jurisdiction and because the committee’s top Republican, Rep. Ken Buck, believes allegations of ideological bias stem from a broader monopoly problem in tech.

“These companies have maintained monopoly power in the online marketplace by using a variety of anticompetitive behaviors to stifle competition,” Buck said in a statement. “This legislation breaks up Big Tech’s monopoly power to control what Americans see and say online, and fosters an online market that encourages innovation and provides American small businesses with a fair playing field.”

The legislation seeks to impose restrictions on only the nation’s largest platforms. For example, a proposed ban on so-called “killer acquisitions” would apply to platform companies with a market cap of over $600 billion and at least 50 million monthly users or 100,000 business customers.

While the bills prohibit certain practices, they hand responsibility for enforcement (and greater resources) to antitrust officials at the Justice Department and Federal Trade Commission.

“America has been on the sidelines” when it comes to antitrust enforcement, one of the aides said. “We’ve been asleep at the switch over these many, many transactions. There’s a growing consensus around the world that the status quo is not working.”