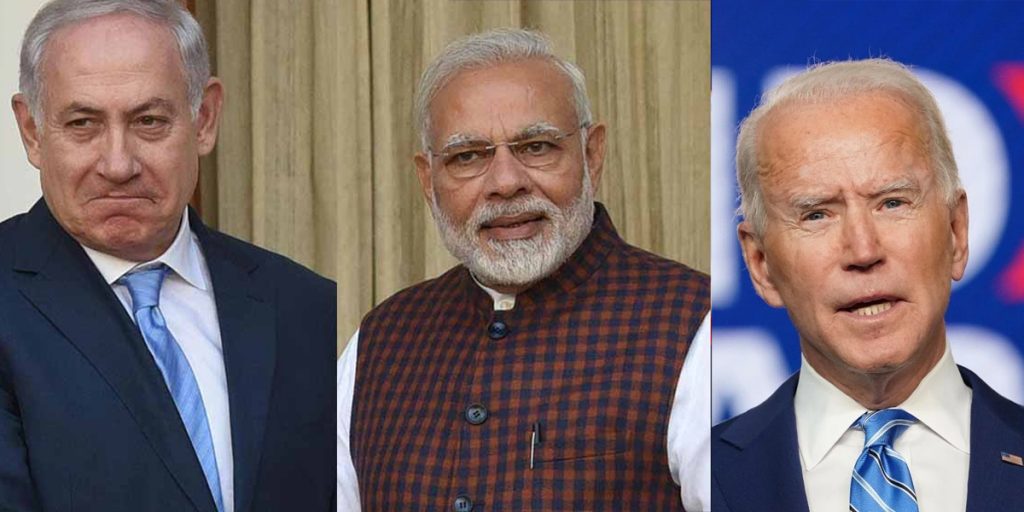 With technology becoming one of the main drivers of contemporary international relations, defining politics, security, and economics, India, Israel, and the US can carve out trilateral cooperation focusing on defense technology, says a paper by the Mumbai-based think tank Gateway House.

“Such potential collaboration will capitalize on the existing robust bilateral defense and security cooperation amongst the three countries. It also promises to give a technological edge to their militaries, develop interoperability and provide opportunities for exports,” says the paper authored by Sameer Patil, Fellow, International Security Studies Programme at Gateway House.

Patil says the challenges to the three countries, that have substantial bilateral cooperation among them, coming together include India’s military ties with Russia which run afoul of ties with the US, and Israel’s defense ties with China.

The paper titled “Inserting India into US-Israel Defence Technology Cooperation,” argues that technology was shaping emerging potential alliances with UK prime minister Boris Johnson’s proposing a “D-10″ ie a coalition of 10 democracies to create an alternative supply chain of 5G and other emerging technologies or the “T-12″ proposed by two former US State Department officials to group together “techno-democracies” or those countries with top technology sectors, that are advanced economies with a commitment to liberal democracy.

For the US, Israel was already a “principal military ally in West Asia.” It was a “technologically advanced partner” in areas like defense, cybersecurity, renewable energy, and food security. Israeli defense companies like Israel Aerospace Industries (IAI) had an extensive engagement with US defense firms including the likes of Boeing and Lockheed Martin. “Silicon Valley majors such as IBM, Intel, and Google have tapped into Tel Aviv’s start-up ecosystem for years,” the paper said.

In the case of India, New Delhi had emerged as a principal partner of the US in the Indo-Pacific besides offering a large market for American defence industry. The signing of the 2005 “Framework Agreement for Defence Cooperation”, it renewal in 2015, the elevation of ties to a “comprehensive global strategic partnership,” in 2020, all contributed to the growth in the India-US defence ties.

For Israel, substantial US foreign and military aid had enabled it to achieve a “qualitative military edge over its quantitively superior Arab neighbors,” the paper says.`

“As a Major Non-NATO Ally (MNNA) of the US, Israel gets specific military benefits like advanced defense technologies on a priority basis and intelligence-sharing. The high degree of mutual trust between the two countries is also evident with Israel being the only country to receive unfettered access to American military technology and equipment such as the F-35 fighter jet,” it says.

In the case of India, New Delhi is already the largest purchaser of Israeli weapon systems. “Joining hands with India in expanding the scope of bilateral defense cooperation to include the US, will not only reinforce its access to the Indian market but also offer opportunities for exports to emerging markets in Asia and Africa—India’s traditional defense export destinations,” the paper says.

For India, Israel is already a major defense partner with annual arms sales averaging $1 billion, “the mainstay of the bilateral relationship,” says the paper. Israeli radar and missile defense systems along with drones and avionics “have augmented the Indian military’s surveillance and operational capabilities,” it says. Israel has also “aligned itself” with the “Make in India” initiative.

With the US, India has acquired the unique status of ‘Major Defense Partner’ in 2016 which opened access to advanced technology. This was followed by India receiving the Strategic Trade Authorisation-1 status in 2018, enabling access to dual-use high-tech items, it says. “Defence trade and technology co-development and co-production are the two most important dimensions of this relationship,” it says.

On the flip side, Israel and the US “have already reached an advanced stage of research and cooperation for many of these technologies — compared to India which is still discussing the implications of some technologies like AI and quantum computing, and expanding its technological capabilities in others ¬— such as robotics,” the paper says. The lengthy defense acquisition procedures of India could dampen the enthusiasm of start-ups, it warns.

Previous ArticleA Tale of Two Carmakers: GM and ToyotaNext ArticleWhy the US Treasury’s Call for a Global Minimum Tax Is Unfair to Develop Economies