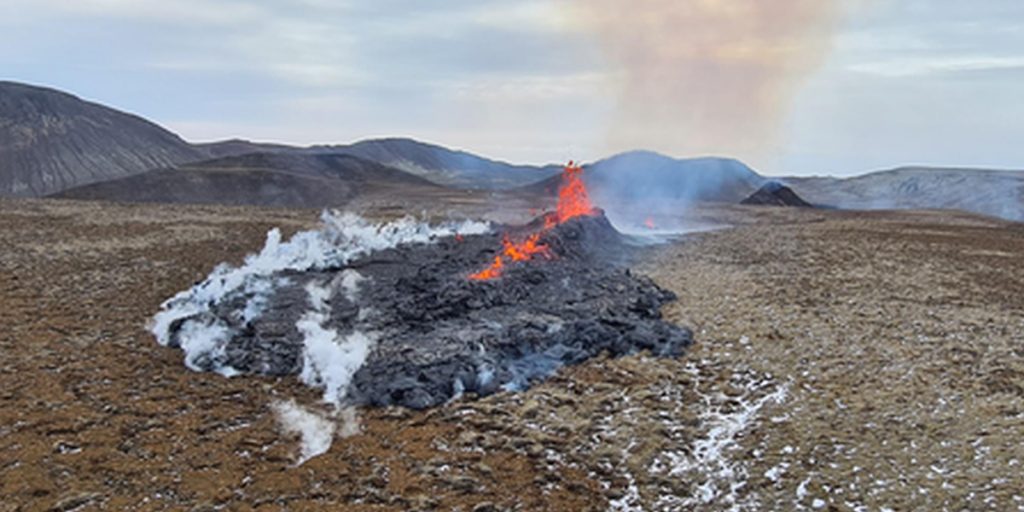 The lava is flowin’.

Molten rock likely from miles underground is flowing out of a newly opened fissure in the ground on Iceland’s Reykjanes Peninsula. It’s the latest activity in an already captivating volcanic episode: An eruption of gooey, fountaining lava started in the region on March 19, but on April 5 another large (around 200-meter-long), lava-spewing crack opened up nearby.

Volcanologist Evgenia Ilyinskaya, who is on-site at the eruption, received an emergency text Monday morning about the new rift. “I was driving away from my sampling site when I got this message,” Ilyinskaya tweeted. “Before I saw the text I could see the eruption plume getting huge in my rear mirror. I wouldn’t have been in danger but it was still enough to raise the heart rate!”

As volcanism goes, the new Icelandic eruption is generally calm, small, and non-explosive. It’s not currently a threat to any Icelandic inhabitants, so it’s purely a marvel of new earth pouring from the ground.

“For the most part it’s relatively tame,” Jess Phoenix, a volcanologist and executive director of the environmental research organization Blueprint Earth, told Mashable last week. But even a tame eruption is exhilarating. “Volcanoes are more glorious than the best Fourth of July fireworks display,” said Phoenix.

Some volcanic eruptions are explosive, like the violent Mount St. Helens eruption in 1980. These eruptions have magma (underground molten rock) that’s a lot thicker and more viscous than the magma from the current Iceland eruption. In other words, explosive volcanism often involves molten rock that tends not to flow. The magma stays underground where it can build up enormous amounts of pressure and potentially explode, like a shaken-up soda can.

In contrast, the current eruption in Iceland is less viscous. “It’s oozy and runny,” explained Phoenix. “It’s like what we see in Hawaii a lot of the time.”