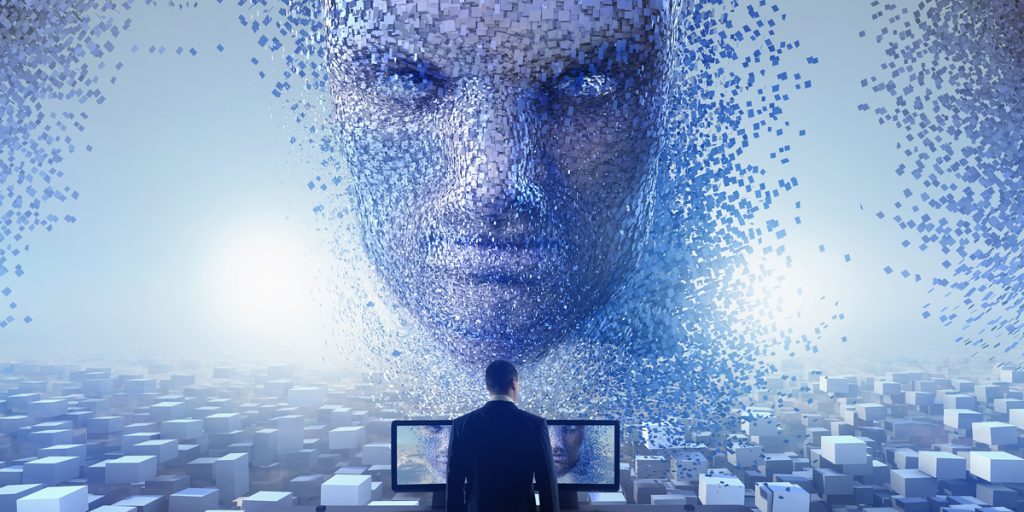 Over a century ago, GK Chesterton observed that the greatest mistake of civilization is that we try to adapt human beings to suit the needs of systems, instead of vice versa. Our world today is becoming massively systematized through a series of more sophisticated algorithmic systems. Machine learning has given us a world where anything can be discerned and anything can be counterfeited. Tiny crumbs of information can embed a signature that no amount of effort may remove. Simply put, there is nowhere to hide anything, nothing can be believed, and no one can be trusted. Due to their complexity and opacity, such systems are often emancipated from proper human agency and oversight. A civilisation built upon such systems will recreate the mistakes of the past at greater speed and scale, unless we take careful, deliberate action to prevent individuals and societies from becoming systematised in unhealthy ways. Will our future civilization improve the human condition, or increase human suffering for the betterment of a plutocratic elite? Whether these technologies are applied by coercion or by consent will decide our future: Tyrannical injustice for the human spirit, or its liberation.

The new blue-collar worker is no longer defined by their overalls, but rather whether they labor under algorithmic threat and nuisance, observed incessantly and badgered in various dehumanizing ways. Such tools can certainly add value for both employers and employees; for example, to remind people to wear appropriate safety equipment, or to aid on-the-job training. However, we must ensure that they are deployed with sensitivity and that they respect the agency and human needs of workers, especially when working from home, as many are expected to allow home surveillance. An empathetic touch is essential if such tools are not to be a repressive yoke upon human beings. Such technologies must demonstrate that they are trustworthy, unbiased, and are designed to serve the needs of the workers first, and not their paymasters. People will rebel against oppressive personages, but they find it hard to organize themselves against oppressive faceless systems, a generator of banal evils, great and small. Such systems consume those who accept and engage with them, and also corrupt the others who run them rendering those people apathetic. The blank-faced apparatchiks who mindlessly serve such systems are eventually drained of their reason and compassion through automation apathy and learned helplessness.

There will inevitably be dissidents who demur and fall in line with the systematized narrative. How will those with godlike algorithmic power be disposed to treat those who dare to dissent? Those heretics whom the gods would aim to destroy will be first driven to madness. These were the favored tactics of the East German State Security Bureau, the Stasi, who decomposed the lives of dissidents in non-obvious ways, gaslighting them to doubt reality whilst turning their loved ones against them, until they were too unhinged to pose a threat to power. Contemporary examples from Big Tech portend a future where cancellation and harassment of undesirables are systemized through intelligent algorithms solving for personally profiled bullying riffing from our data exhaust.

Corporates increasingly serve as surrogates for government action, the hallmark of fascist governance. The revolving door between government and big business enables those who oversaw illegal wiretapping operations to take a board seat at a company, which willingly placed hundreds of millions of listening devices in pockets and homes, whilst making deals for hundreds of millions of dollars with those same intelligence services. Moreover, now these ventures are running their intelligence agencies, and can directly tackle unfavorable regimes.

This fusion of government and Big Tech power has created a new theatre of war, a battleground for the minds of citizens, both foreign and domestic. Social Credit systems track the lives of citizens, collecting information and searching for an exploitable opportunity. Central Bank Digital Currencies enable such data to be inferred directly from purchases and provide a means to immediately penalize or disenfranchise those who express undesirable behavior.

Securing information in a world where one’s computer is itself dozens of potentially exploitable sub-computers is a futile endeavor. A global cold cyberwar of shadows and plausible deniability is burgeoning, where even allies stab each other in the back. Intelligence services serve national economic interests through cyberattacks on rivals, whilst passing on pilfered secrets to local ventures.

Le Mal des Machines
The power of these increasingly powerful and ugly systems of questionable benefit is reflected in the humans who experience them. A significant percentage of the young population identifies themselves as traumatized. In the UK, one in eight young people seek professional mental help, and 17 percent of the adult population are hooked on powerful anti-depressant drugs with massive side effects.

No creature is happy in a panopticon, especially one of our creations. Our apparent pathologies are an adaptation to living in an atomized society of intrusive technofeudal servitization, one that no longer satisfies our needs, yet tantalizes us with supernormal stimuli.

Magic in service of man
The capability of these technologies to recognize patterns within patterns is naturally far beyond our own, in fact beyond our ability to explain. As Arthur Clarke observed in his book, “Profiles of the Future: An Inquiry into the Limits of the Possible”, sufficiently advanced technology is indistinguishable from magic. Such magic must be applied in service of man, not to rule over him.

The consolidation of power amongst a Big Tech elite fused with state intelligence grows ever stronger. These entities can know everything about us, yet carefully hide their own clandestine obfuscated activities. The best defense to this asymmetry is radical, mandated, and cryptographically secure transparency. To illustrate, in commercial aircraft, we have two essential data recorders (‘black boxes’). One monitors the aircraft itself, and the other monitor’s cockpit chatter. Both recorders are necessary to understand why an incident has occurred. For the same reasons, we need a similar approach to humane technology. Transparency is the foundation upon which every other aspect of ethical technology rests. It is essential to understand a system, its functions, as well as attributes of the organization, and not to forget, those who steer it. Through transparency, we can understand that the incentive structures within organizations are aligned towards producing honest good faith outcomes. We can understand what may have gone wrong and how to fix it in the future. Only then may an audit occur to uncover and mitigate biases, to discover appropriate accountability, and ensure that privacy, economic franchise, and human dignity are being respected. We can also verify that user choice is being respected.

Building better angels
Humane technology is not something that can be won outright, rather it is attrition of catastrophe through progressively better safeguards. Instilling ethics into technology is the greatest challenge of our time. If we fail, insidiously totalitarian regimes may trample on our spirit for ages; if we win, even a little, the benefits could be profound.

Humane and trustworthy AI could make sense out of chaos, revealing the mysteries of the universe, and finding incredible solutions we could never have found by ourselves.

Humane AI could be the ultimate creative muse, helping us to discover new ideas as well as to trivially bring them to reality, It could make our remaining chores fun and more relaxed.

It could help us to understand our effects upon the natural and social environment, to reduce our trespasses, and sustainably enjoy the fruits of capitalism. It could be a beloved friend and confidante, helping us to be happier and stronger people, better able to cope with stressors. It can help us to translate between people who cannot see eye-to-eye, to build peace. It could help us to come together for our mutual benefit, eschewing zero-sum games of winners and losers. It could help us to grow more than the sum of our parts, to unite the world in a common cause.

All this possibility lies before us, the wonderful and the wretched. For the sake of countless generations to come, let us help to nurture a kinder society of magnanimous machines.