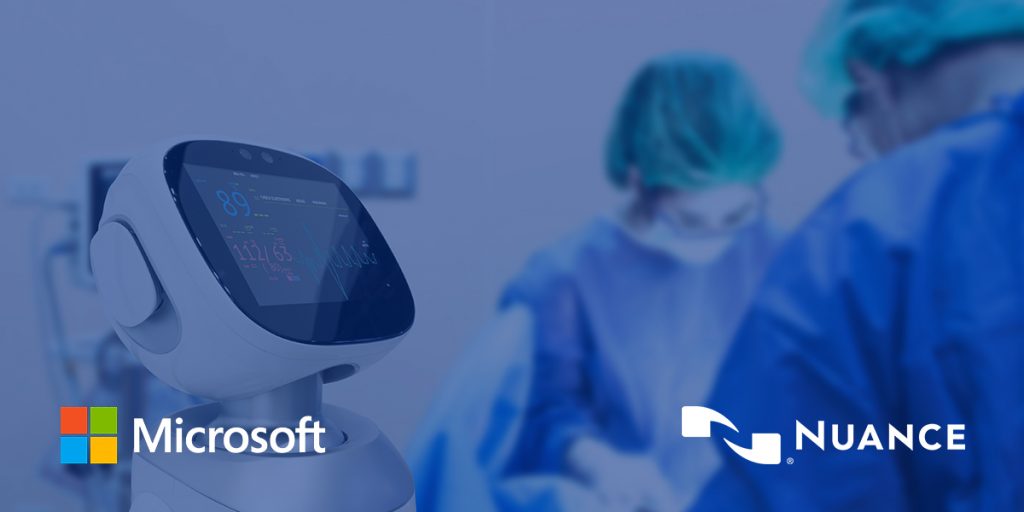 The software giant is set to buy Nuance Communications Inc., tapping the company tied to the Siri voice technology to overhaul solutions that free doctors from note-taking and better predict a patient’s needs. Microsoft may announce the deal as soon as Monday if talks are successful, according to people familiar with the matter.

The price being discussed could value Nuance at about $56 a share, a 23% premium to Friday’s close, said one of the people, who asked not to be identified because the information is private. Set to be Microsoft’s largest acquisition since LinkedIn Corp., the purchase would give Nuance an equity value of about $16 billion, data compiled by Bloomberg show.

Microsoft has been trying to make inroads into the health-care sector, selling more cloud software to hospitals and doctors. It has been working with Nuance for two years on AI software that helps clinicians capture patient discussions and integrate them into electronic health records, and combining the speech technology company’s products into its Teams chat app for telehealth appointments.

The “Nuance deal would be a trophy for Redmond,” said Wedbush analyst Dan Ives, referring to Redmond, Washington-based Microsoft. “Nuance is in the midst of an unprecedented strategic turnaround the last few years under the leadership of CEO Mark Benjamin and we believe the company represents a unique asset on the health-care front for Microsoft.”

Under Benjamin, Nuance has narrowed its focus and separated peripheral businesses, such as Cerence Inc., the automotive AI unit that was spun off two years ago. It also sold its imaging division to Thoma Bravo’s Kofax for $400 million, and zoomed in instead on partnerships with health-care providers and the biggest electronic medical records companies.

A representative for Microsoft declined to comment. A spokesperson for Nuance, based in Burlington, Massachusetts, didn’t immediately respond to a request for comment.

Nuance’s shares have climbed 3.4% this year, giving the company, which laid the groundwork for the technology used in Apple Inc.’s Siri, an almost $13 billion market value. The gain still trailed the 9.9% jump in the S&P 500 Index, while Microsoft added 15%.

As AI software gets better at parsing language and predicting medical needs, Nuance and Microsoft may be able to develop technology that searches for certain words in health records to make better suggestions to doctors for patient care.

“This can really help Microsoft accelerate the digitization of the health-care industry, which has lagged other sectors such as retail and banking,” said Anurag Rana, a Bloomberg Intelligence senior analyst. “The biggest near-term benefit that I can see is in the area of telehealth, where Nuance transcription product is currently being used with Microsoft Teams.”

Nuance, whose products include Dragon speech-recognition software, had net income of $91 million on revenue of $1.48 billion for its fiscal year ending Sept. 30., after losing $217 million the previous year.

Microsoft has also been increasingly focused on healthcare. In May, the software maker unveiled a package of industry-specific cloud software, and has also hired executives with medical backgrounds and researching machine learning and AI tools for areas including clinical trials.

Coincidentally, one of Microsoft’s Boston area offices is located right next to Nuance’s headquarters.

With a market value of $1.93 trillion, the most in the world after Apple, Microsoft remains active on the deals front.

Last month, Bloomberg News reported that the software giant was in talks to acquire Discord Inc., a video-game chat community, for more than $10 billion. It also bought video-game maker Zenimax Media Inc. for $7.5 billion in cash in a deal that closed this year.

The Nuance purchase would rank as Microsoft’s second-largest acquisition, behind the 2016 LinkedIn purchase at an equity value of more than $26 billion, according to data compiled by Bloomberg.

Microsoft entered the artificial intelligence space decades ago with research projects and an early focus by co-founder Bill Gates on finding ways to make it easier for people to speak to computers using plain English.

The Nuance purchase will complement efforts in recent years, where Microsoft has assigned thousands of employees to its AI work and released tools customers can use to build applications that understand and translate speech, recognize images and detect anomalies. The company views AI as a key driver of future sales of cloud services.

The acquisition may also give Microsoft a boost as it faces fierce competition in the AI space with rivals such as Alphabet Inc.’s Google and Amazon.com Inc. also investing heavily in the field.