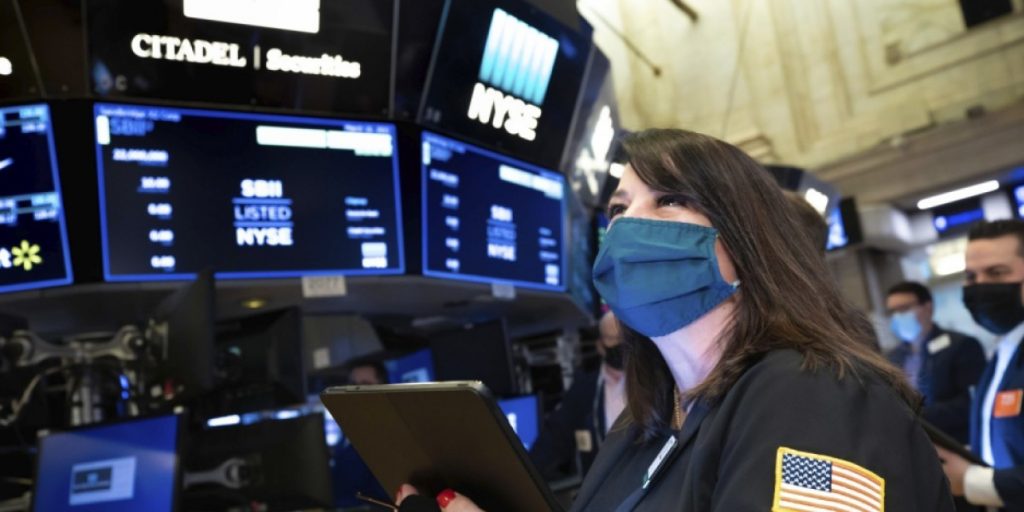 According to data compiled by FactSet, the blended earnings growth rate for the first quarter is 30.2%, higher than the previous forecast of 24.6%. Positive earnings surprises reported by financial companies – JPMorgan, Goldman Sachs, Citigroup, Bank of America, and Wells Fargo – were the main contributors to the improvement in overall earnings last week.

Looking ahead, 84 S&P 500 companies or 17% of the index’s constituents are releasing Q1 results this week. Those include big tech companies such as IBM, Netflix, and Intel, although the majority of the FAANG companies will report earnings in the week after.

Looking at future quarters, analysts project double-digit earnings growth for the remaining three quarters of 2021, with a peak expected in Q2 at 54.6%. These above-average growth rates are attributed to both a faster pace of economic recovery and a low-base effect. Higher earnings are likely to lower price-to-earnings (PE) ratios for the three major indices, creating room for them to drive deeper into record territory.

Last week’s strong US inflation and retail sales growth figures underscored growth momentum in the world’s largest consumer market. Chinese retail sales growth also smashed market expectations and pointed to a brighter economic outlook. In the US, nearly 40% of the population has received at least one dose of Covid-19 vaccines as the campaign rolled out smoothly. The uneven distribution of vaccines among developing countries, however, may cast a shadow over the global recovery and broader reopening.

Looking ahead, Thursday’s ECB interest rate decision dominates the economic docket alongside a slew of Markit manufacturing PMI readings from Europe and the US. The ECB is expected to keep its policy rate and asset-purchasing programs unchanged. ECB President Christine Lagarde is likely to sound dovish at the press conference, having emphasized last Wednesday that monetary and fiscal stimulus cannot be taken away until the economy makes a full recovery. Meanwhile, oil traders will eye Wednesday’s API crude inventory data for clues about the supply and demand relationship. Find out more from theDailyFX calendar.

The Nasdaq 100 index has likely formed an inverse “Head and Shoulders” pattern, which may serve as a strong bullish reversal indicator. The index surpassed its previous high of 13,900, opening the door for further upside potential towards 14,360 – a level that the “Head and Shoulders” pattern implies. The MACD indicator trending higher, suggesting that upward momentum is prevailing.

The Hang Seng Index (HSI) has likely formed a “Head and Shoulders” chart pattern too, but in this case, it serves as a bearish trend-reversing indicator. There could be more downside room if the pattern completes. An immediate resistance level can be found at the 50-day SMA line (29,033), whereas an immediate support level can be found at 28,863 – the 38.2% Fibonacci retracement. The MACD indicator is trending higher beneath the neutral midpoint, suggesting that bullish momentum is building.

The ASX 200 index breached above the ceiling of the “Ascending Channel” and moved forward to test key resistance at 7,070 – the 100% Fibonacci extension. The upward momentum appears to be gaining momentum as suggested by rising MACD trendlines. A firm breakout above 7,070 would likely open the door for further upside potential with an eye on 7,260 – the 217.2% Fibonacci extension.