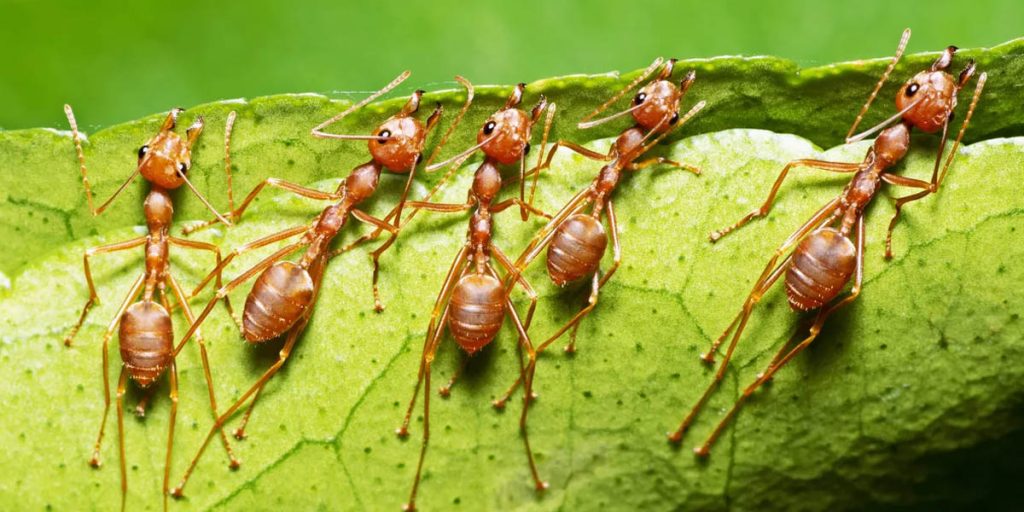 To keep consumer electronics shrinking in size, engineers need to build tiny yet tremendously strong instruments to use in the gadgets’ construction. One group is hoping to get blueprints from mother nature by studying some of the teeniest, toughest tools we know of: ant teeth.

Thinner than a strand of human hair, the insects’ miniature chompers can bite down forcefully enough to cut through sturdy leaves without suffering any damage. It all has to do with the teeth’s even arrangement of zinc atoms, which allow for equal distribution of force each time the creatures crunch on something. That feature, researchers say, can one day be applied to human-made tools.

“Having the uniform distribution, essentially, is the secret,” said Arun Devaraj, a senior research scientist at the US Department of Energy’s Pacific Northwest National Laboratory and author of a study on the composition of ant teeth published Wednesday in the journal Scientific Reports. The ant chompers “can even cut human skin without breaking — it’s hard to even do that with our own teeth.”

To get to the bottom of nature’s secrets and meet humanity’s need for pocket-size electronics — so we can conveniently check our Twitter feeds, of course — the study researchers first isolated a minuscule piece of a single ant tooth. Ants have two, or sometimes more, teeth on their curved external mandible, or jaw. Then, the team turned to a technique called atom probe tomography, which precisely paints a picture of where each atom within an object is located.

“The plan,” Devaraj said, “was to use that technique to really understand how zinc is distributed inside these ant teeth, and how that is leading to the strength that it’s getting.”

Atom probe tomography works through reverse analysis. Basically, you can put an item in a chamber, then slowly evaporate it — atom by atom — and collect each component’s data on a detector. Using that information, you can then reconstruct the object as a 3D model, except this time with identifiable atoms.

After following these steps with a microscopic “needle” of an ant’s nibbler, the team found that the tooth’s zinc atoms — responsible for the piercing, painful nature of ant bites — were distributed in a surprisingly uniform manner rather than in clumps.

Each time an ant bites into something, the force is perfectly spread throughout their teeth because of the even dispersal of zinc atoms. That explains why only about 10-20% of zinc is actually necessary for their mighty dental material. Better yet, the researchers say the animals end up using about 60% or less of the force than they would require if their teeth were identical to our comparatively weak pearly whites, which have different types and distributions of elements.

“Organic and inorganic chemists can actually work together to synthesize materials that are really strong, inspired by these kinds of materials,” Devaraj said.

Applying the concept of evenly spread atoms — zinc, or other elements — to instruments that build human technology would offer our future mini-tools a twofold benefit. They would be cheaper, because a smaller amount of costly, stronger components would be necessary. They’d also be more efficient due to the fact that less force would be required during use.

Next, Devaraj and fellow researchers seek to continue finding ways of revolutionizing how we construct compact tech devices by analyzing other teeny tiny species that roam around with powerful weaponry.

“We have already started looking at scorpion stings, for example, and the spider fang,” Devaraj said, “and many other kinds of miniature tools to understand the kind of small tool arsenals of insects.”