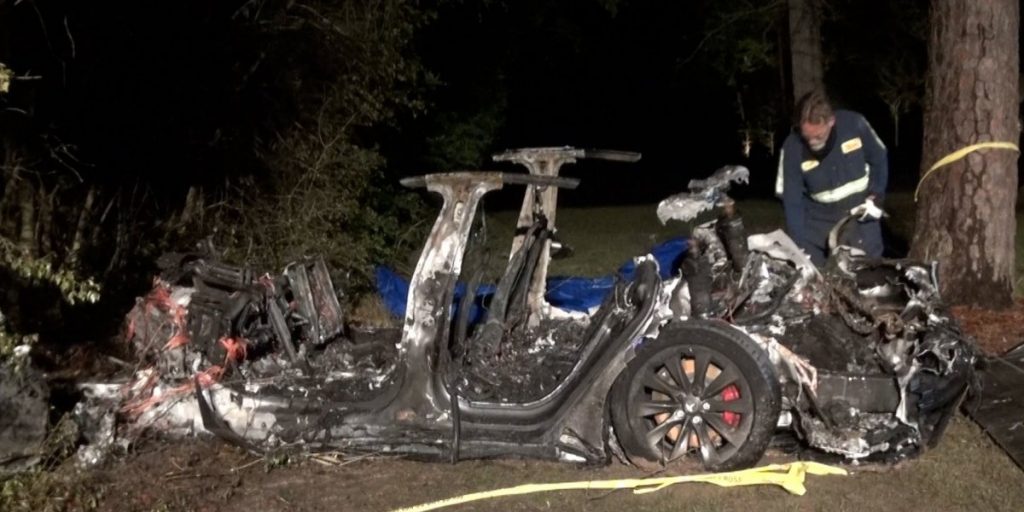 The fiery crash of a Tesla near Houston with no one behind the wheel is drawing scrutiny from two federal agencies that could bring new regulation of electronic systems that take on some driving tasks.

The National Highway Traffic Safety Administration and the National Transportation Safety Board said Monday they would send teams to investigate the Saturday night crash on a residential road that killed two men in a Tesla Model S.

Local authorities said one man was found in the passenger seat, while another was in the back. They’re issuing search warrants in the probe, which will determine whether Tesla’s Autopilot partially automated system was in use. An autopilot can keep a car centered in its lane, keep a distance from cars in front of it, and can even change lanes automatically in some circumstances.

On Twitter Monday, Tesla CEO Elon Musk wrote that data logs “recovered so far” show Autopilot wasn’t turned on, and “Full Self-Driving” was not purchased for the vehicle. He didn’t answer reporters’ questions posed on Twitter.

In the past, NHTSA, which has the authority to regulate automakers and seek recalls for defective vehicles, has taken a hands-off approach to regulating partial and fully automated systems for fear of hindering the development of promising new features.

But since March, the agency has stepped up inquiries into Teslas, dispatching teams to three crashes. It has investigated 28 Tesla crashes in the past few years, but thus far has relied on voluntary safety compliance from auto and tech companies.

Agency critics say regulations — especially of Tesla — are long overdue as the automated systems keep creeping toward being fully autonomous. At present, though, there are no specific regulations and no fully self-driving systems available for sale to consumers in the U.S.

At issue is whether Musk has over-sold the capability of his systems by using the name Autopilot or telling customers that “Full Self-Driving” will be available this year.

“Elon’s been totally irresponsible,” said Alain Kornhauser, faculty chair of autonomous vehicle engineering at Princeton University. Musk, he said, has sold the dream that the cars can drive themselves even though in the fine print Tesla says they’re not ready. “It’s not a game. This is serious stuff”.

Tesla, which has disbanded its media relations office, also did not respond to requests for comment Monday. Its stock fell 3.4% in the face of publicity about the crash.

But her replacement under President Joe Biden, Pete Buttigieg, indicated before Congress that change might become.

“I would suggest that the policy framework in the U.S. has not really caught up with the technology platforms,” he said last month. “So we intend to pay a lot of attention for that and do everything we can within our authorities,” he said, adding that the agency may work with Congress on the issue.

Tesla has had serious problems with Autopilot, which has been involved in several fatal crashes where it failed to stop tractor-trailers crossing in front of it, stopped emergency vehicles, or a highway barrier. The NTSB, which can only issue recommendations, asked that NHTSA and Tesla limit the system to roads on which the system can safely operate and that Tesla install a more robust system to monitor drivers to make sure they’re paying attention. Neither Tesla nor the agency took action, drawing criticism and blame for one of the crashes from the NTSB.

Missy Cummings, an electrical and computer engineering professor at Duke University who studies automated vehicles, said the Texas crash is a watershed moment for NHTSA.

She’s not optimistic the agency will do anything substantial but hopes the crash will bring change. “Tesla has had such a free pass for so long,” she said.

Frank Borris, a former head of NHTSA’s Office of Defects Investigation who now runs a safety consulting business, said the agency is in a tough position because of a slow, outdated regulatory process that can’t keep up with fast-developing technology.

The systems hold great promise to improve safety, Borris said. But it’s also working with “what is an antiquated regulatory rule promulgating process which can take years”.

Investigators in the Houston-area case haven’t determined how fast the Tesla was driving at the time of the crash, but Harris County Precinct Four Constable Mark Herman said it was a high speed. He would not say if there was evidence that anyone tampered with Tesla’s system to monitor the driver, which detects force from hands on the wheel. The system will issue warnings and eventually shut the car down if it doesn’t detect hands. But critics say Tesla’s system is easy to fool and can take as long as a minute to shut down.

The company has said in the past that drivers using Autopilot and the company’s “Full Self-Driving Capability” system must be ready to intervene at any time and that neither system can drive the cars themselves.

On Sunday, Musk tweeted that the company had released a safety report from the first quarter showing that Tesla with Autopilot has nearly a 10 times lower chance of crashing than the average vehicle with human piloting it.

But Kelly Funkhouser, head of connected and automated vehicle testing for Consumer Reports, said Tesla’s numbers have been inaccurate in the past and are difficult to verify without underlying data.

“You just have to take their word for it,” Funkhouser said, adding that Tesla doesn’t say how many times the system failed but didn’t crash, or when a driver failed to take over.

Funkhouser said it’s time for the government to step in, set performance standards, and draw a line between partially automated systems that require drivers to intervene and systems that can drive themselves.

“There is no metric, there is no yes or no, black or white,” she said. She fears that Tesla is asserting that it’s not testing autonomous vehicles or putting self-driving cars on the road, while “getting away with using the general population of Tesla owners as guinea pigs to test the system”.