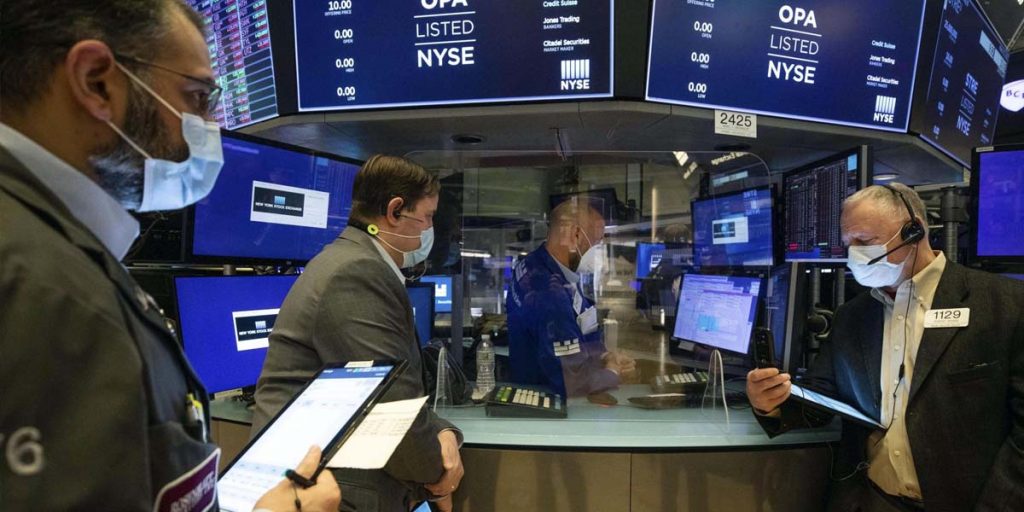 The S&P 500 dropped 0.5 percent, shedding more than a third of its gain from last week. Tech stocks were the biggest weight on the market, but the losses were shared broadly by a mix of banks, energy companies, and others that rely on direct consumer spending.

The pullback came as bond yields mostly moved higher after easing last week. Rising bond yields tend to make shares in technology companies that have had a strong runup over the past year look too expensive.

“What we’re seeing in the markets today is that bond yields, after falling last week, are back to rising again,” said Megan Horneman, director of the portfolio strategy at Verdence Capital Advisors. “And you can see that negative correlation between rising bond yields and declining prices in technology is still with us”.

NEW YORK — The union that failed to organize Amazon workers at an Alabama warehouse wants the results to be thrown out, saying that the company illegally interfered with the voting process.

The Retail, Wholesale, and Department Store Union said in a filing that Amazon threatened workers with layoffs and even the closing of the warehouse if they are unionized. It also said Amazon fired a pro-union employee but declined to name the person.

Many of the union’s other allegations revolve around a mailbox that Amazon installed in the parking lot of the Bessemer, Ala., warehouse. It said the mailbox created the false appearance that Amazon was conducting the election, intimidating workers into voting against the union. Security cameras in the lot could have recorded workers going to the mailbox, giving the impression that workers were being watched by the company and that their votes weren’t private, according to the union.

Amazon spokeswoman Heather Knox said the company did not threaten layoffs. She said the mailbox was installed to make it easier for employees to vote and that only the U.S. Postal Service had access to it.

Workers overwhelmingly voted against the union. About 53 percent of the nearly 6,000 employees voted.

The union filed the objections to the National Labor Relations Board. In doing so, it is asking the board to investigate the allegations, schedule a hearing, and decide whether to hold a second election or overturn the results.

Port of Savannah had a busy March

SAVANNAH — Georgia officials say record cargo volumes in March have the Port of Savannah headed toward a big milestone in the 2021 fiscal year.

The Georgia Ports Authority said in a news release that Savannah is on track to handle 5 million container units of imports and exports when the fiscal year ends June 30.

That’s after the port saw 500,000 container units move across its docks in March, a record for that month that brought Savannah close to 4 million container units for the first nine months of the fiscal year.

The coronavirus pandemic kept growth at the Port of Savannah essentially flat in fiscal 2020, though business has roared back since.

Savannah is the nation’s fourth-busiest seaport for cargo shipped in containers. The large metal boxes are used to transport retail goods from consumer electronics to frozen chickens.

NEW YORK — Sales are steadily improving at Coca-Cola Co. as vaccinations allow for the opening of restaurants and offices in many regions globally.

Coke historically had booked half its sales from restaurants, stadiums and other public places. The pandemic broadsided the company.

As of March, case volumes had returned to 2019 levels, the beverage giant said. First-quarter volume growth was particularly strong in China, which was locked down last year.

Coke CEO James Quincey said reopenings are happening in three phases as vaccine rates increase. First, he said, people start going out to restaurants in the evenings. That business has returned in markets like China and Australia and began bouncing back in the U.S. last month, Quincey said.

Next, offices reopen and lunchtime business picks up. That has started in China, but not yet in the U.S., he said. Finally, stadiums, theaters and other big venues will reopen, but that’s not yet happening on a large scale in any markets, he said.

Quincey said the company remains on track to deliver 2021 earnings that match or exceed 2019. But he cautioned that sales could still slip backward. Global coronavirus cases recently hit a new peak, he said, and that could cause some markets to shut down again.

Sales rose 5 percent to $9 billion in the January-March period this year, the Atlanta company said April 19. But the recovery is uneven. Case volume fell 6 percent North America and 2 percent in Europe and Africa. Case volume was flat in Latin America and jumped 9 percent in Asia.

Net income dropped 19 percent to $2.2 billion in the first quarter.

NEW YORK — The overhaul in the top ranks of GameStop continues with the announced departure of CEO George Sherman at the end of July.

Less than two weeks ago, the company announced the nomination of Chewy founder Ryan Cohen as chairman of the board, a major investor in the floundering video game retailer.

Cohen had been buying huge stakes in the company and pushing for a digital transformation. GameStop has suffered as more gamers turn to digital downloads rather than the discs the chain sells on its shelves.

Cohen was joined by two of his former colleagues on the board.

They’re arrival coincided with the meteoric January rise of GameStop’s shares in a bizarre market phenomenon that pitted smaller investors who banded online against major, institutional investors who had been shorting the stock, or betting it would fall below the $20 price level in January.

Shares of Gamestop Corp. now cost around $170, up 720percent this year. At the end of a flurry of trading in January, the shares were close to $500 each.

Last month in a regulatory filing, GameStop said that it had and hired an executive headhunter as it evaluated company leadership and that its directors had spoken to potential candidates.