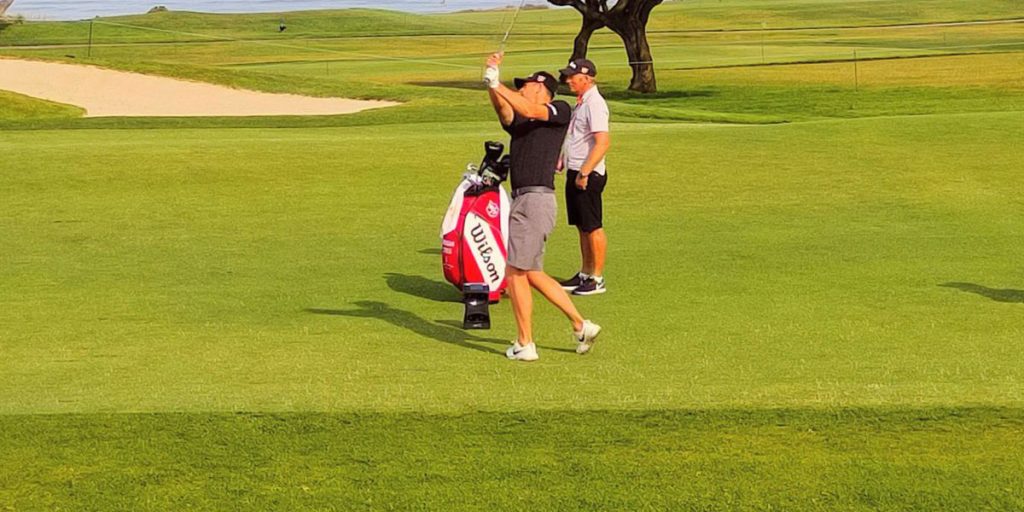 At 8 a.m. sharp yesterday morning, PGA Tour pro Tommy Fleetwood was hitting balls at the far left driving range tee at Torrey Pines Golf Course in San Diego — site of the 2021 U.S. Open that starts tomorrow. He was swinging irons, sharing the tee box with his Foresight Sports GCQuad launch monitor — which was displaying all of the shot and swing data he could ever ask for. That includes clubhead speed, smash factor, attack angle, club path, face angle at impact, loft and lie at impact, ball speed, horizontal and vertical launch angles, ball spin and side spin, carry distance, and precisely where the ball made impact with the face.

Soon thereafter, Phil Mickelson was also seen on range with his GCQuad. It’s becoming a common sight at PGA Tour ranges these days. This week alone at the U.S. Open, one-third of the players can be spotted on the Torrey Pines range with a GCQuad, according to the company. As one insider quipped, this occurrence is commonly referred to as “Quad City” by PGA Tour reps. And the product’s not just on the range. Tour pro Brendan Steele took his out on the course. In fact, he had one caddie with him for his clubs and another for his GCQuad. Yes, someone continuously set the machine in front of him while he hit, then packed it back into a carry bag after the swing, and walked with him to his next shot where the process was repeated. Just how valuable is this 7.5-pound machine to players? Each of the 100+ guys on Tour who own one shelled out $14,000 for it. No player is given one.

According to Rick Cuellar, director of sales at the San Diego-based Foresight, the phenomena started when the GCQuad debuted four years ago. “I would go out with my tour rep to the major events, and show players,” says Cuellar, who this week is back helping out his regular tour rep on the Torrey Pines range. “They brought on the popularity — originally there were 30 or 40 tour pros using it. Others were so ingrained in using radar or the popular Trackman launch monitors that they thought they didn’t need to change. But ours does things quite differently. And the messaging finally got through.” Some top players — including one who endorses a competing brand — began having success after switching over to the GCQuad. That caught the attention of fellow Tour pros, who started buying up the model. Then Rory McIlroy was staying at a private home during an event in Texas last year and began using the homeowner’s GCQuad. He instantly became hooked because he determined it was more accurate than Trackman. And that led to a slew of other pros jumping on board. Many of the major club manufacturers in nearby Carlsbad also use it at their facilities. It’s currently the “it” launch monitor. And it’s manufactured right in town.

Sparing you technical details — and there are many — Cuellar claims his product does a more accurate job in windy conditions. And it’s often windy in Tour events — particularly high up in the sky where balls tend to hit maximum trajectory — so players need to trust information that lets them predict exactly how gusts will affect ball flight. “Trackman can’t judge what the wind’s doing 100 or 130 feet up in the air,” says Cuellar. “Most of the time, they’re estimating what’s happening up in the sky, with fewer data points. We measure the launch condition over 18 inches of the initial ball flight — essentially in an isolated environment that’s only characterizing your ball striking. That’s very important to know over tracking a ball downrange in three-dimensional space. It tells you that on a flat shot your ball is carrying exactly this far in any conditions, not just wind — taking into account the air density, temperature, and more.” And using other data and calculations, GCQuad is able to display precise data.