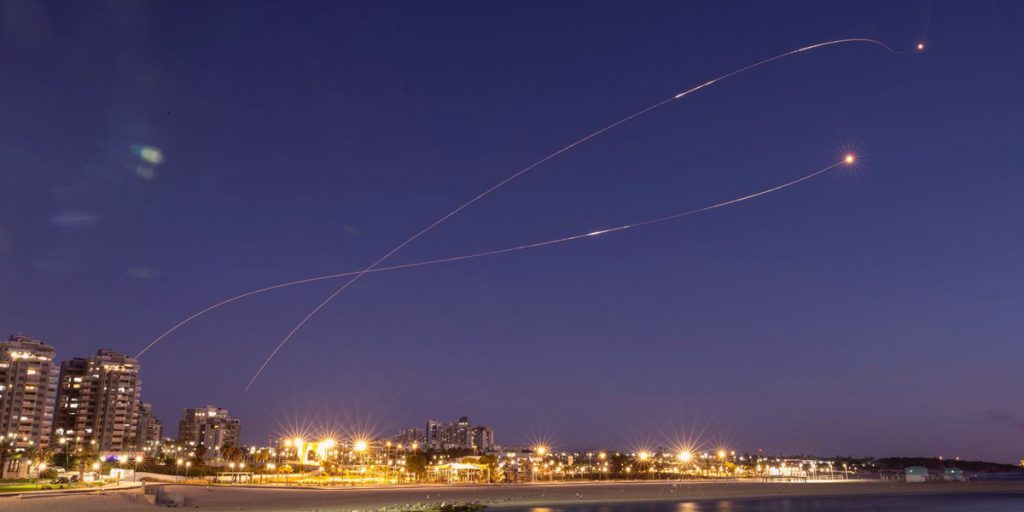 Israel was tested by rocket fire and plague and was not consumed. The secret to its success was more than faith in God. It was a smart use of cutting-edge technologies that led the start-up nation in its war on terror and COVID-19. “Israelis … were scattered and not particularly powerful people until 1947,” wrote South China Morning Post analyst Andrew Sheng. “It was their deep application of science and technology that then allowed them to overcome the Arabs’ numerical superiority.” Here are three examples of how it survived and thrived:

The Iron Dome likely saved thousands of Israeli lives during Operation Guardian of the Walls. Its success rate was slightly more than 90%, according to defense engineer and analyst Uzi Rubin. “Ashkelon was attacked by more than 1,000 missiles, but only around 60 managed to break through and cause damage,” he said. “It protected Tel Aviv, Ben-Gurion Airport, and several Air Force bases.” The Iron Dome was first operated in April 2011 to shoot down short-range rockets fired from Gaza into Ashkelon. Since then, it has intercepted thousands of more rockets. It does not intercept every missile, but only those that it suspects pose a threat, meaning they are likely to land in civilian-populated areas.

The homegrown anti-missile defense system was originally created by Rafael Advanced Defense Systems and now has US support and collaboration. Rubin said that the two countries are always improving the Iron Dome’s technology.
“It could not have handled this quantity of fire unless it was upgraded,” Rubin said. Hamas fired more than 4,300 rockets at Israel over 11 days. It also fired unmanned aerial vehicles (UAVs), which Rubin said the Iron Dome can now shoot down – and did during the operation. Enemies of Israel have accused the country of having an unfair advantage in its wars with Hamas. “So, what should we do, stop using the Iron Dome and let our citizens die?” Rubin asked.

Rather, Israel uses technology not only to protect its citizens but also those of its enemies. “Hamas makes no distinction between civilian and military targets,” said Maj. Gen. (ret.) Amos Yadlin, a former deputy commander of the Israel Air Force. “On the contrary, they want to kill as many citizens as they can.” He said that the rules of war allow Israel to protect its civilians by attacking military targets with proportionate collateral damage. The country uses sophisticated technology to ensure precise attacks. “If you see Israel attack a special apartment building or an apartment within a building then it has good intelligence that Hamas or Islamic Jihad are operating there and that there are no or few innocent people there,” Yadlin said.

This intelligence comes from “information fusing,” explained military expert and author Prof. Isaac Ben-Israel. There are various sources of data – cyber, telephone, pictures from drones, and more. All of this information is collected and using artificial and human intelligence it is fused together to identify the location of a target. “Israel is usually looking for things related to rockets or specific people that are carrying out terror against us,” Ben-Israel said. “When we identify the goal, we need to hit just that goal and not 10 meters to the side.” As such, Israel leverages smaller warheads and smart weapons capable of reaching a selected target with high accuracy in real-time. “Israel has been investing in this for a number of years,” Ben-Israel stressed.

As health officials repeatedly remind the public: the virus does not discriminate between race, religion, or location. However, “the pandemic can be addressed with science and technology, competent organization and mass cooperation,” wrote Sheng. In the fight against COVID-19, technology was also Israel’s secret weapon, as it was Israel’s sophisticated computerized health records system that allowed Prime Minister Benjamin Netanyahu to secure enough vaccines from Pfizer to inoculate more than 5.4 million eligible Israelis. “Israel will share with Pfizer and with the entire world the statistical data that will help develop strategies for defeating the coronavirus,” Netanyahu said in January when the deal was struck. “Israel will be a global model state.”

Israel’s health database dates back three decades. The country’s four health funds all work with computerized records that feed data securely and without revealing private details to the Health Ministry. The ministry used this system to track the vaccine campaign’s progress and continues to use it to track any side effects reported by those who received them. The prime minister has spoken about how he hopes to “turn Israel’s medical database into a huge asset for the country moving forward,” former Israeli Ambassador to the United States Ron Dermer said during a closed briefing he gave on March 24, a recording of which was obtained by the Post. “We are a cyber power; people get that. We are becoming a power in artificial intelligence. I think when it comes to our health database and turning Israel into a beta site for a lot of potential discoveries and vaccines and innovations in the medical field, Israel, I think, is really going to take off there.” The battles are surely not over for Israel, but technology has once again proven to be the country’s protective shield.