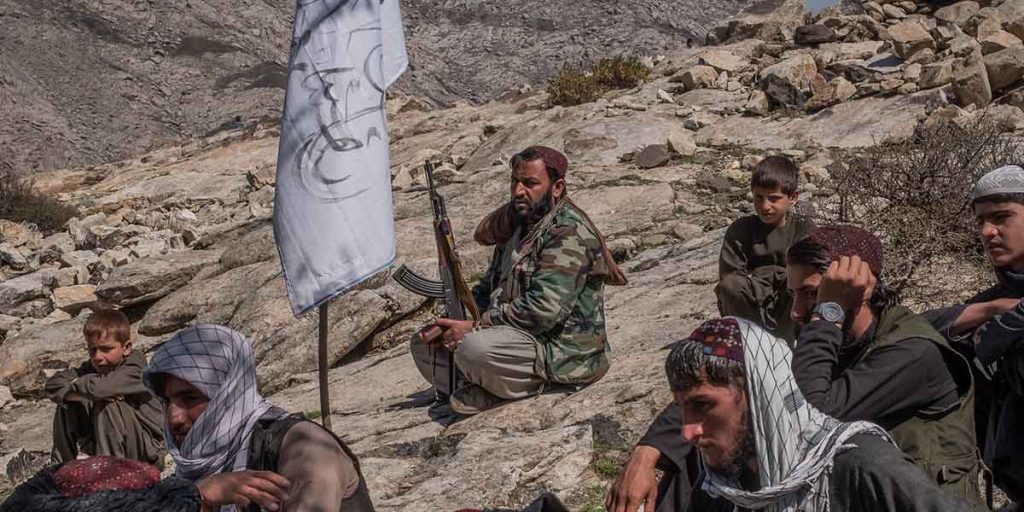 Despite their terrible human costs—or perhaps because of them—wars are often times of technological innovation. The Napoleonic Wars brought us canned goods; the American Civil War drove the development of submarines. The Second World War, meanwhile, began with biplanes, cavalry charges, and horse-drawn wagons but ended with radar, V2 rockets, jet fighters, and atomic bombs. (Perhaps most fundamentally, via the breaking of German codes at Bletchley Park, the war also ushered in the start of the computing revolution.)

The victor, goes the story, is the side that is the most technologically advanced. New inventions allow these forces to adapt to changing conditions, new systems help them track down their targets, and new weapons mean they can crush the enemy more efficiently than before.

But Afghanistan is different. There has been technological progress—the evolution of drone warfare, for example. But the advances made by the US and its allies have not been as pronounced as those seen before, and they haven’t been as profound as some experts have claimed. In fact, contrary to the typical narrative, the technological advances that have taken place during the 20 years of conflict have actually helped the Taliban more than the West. If wars are fought through innovation, the Taliban won.

What do we mean? The West fought the war in much the same way from beginning to end. The first airstrikes in 2001 were conducted by B-52 bombers, the same model that first saw service in 1955; in August, the attacks that marked the end of US presence came from the same venerable model of aircraft.

The Taliban, meanwhile, made some huge leaps. They began this war with AK-47s and other simple, conventional weapons, but today they have harnessed mobile telephony and the internet—not just to improve their weapons and their command-and-control systems, but even more crucially, to carry out their strategic communications and their influence operations.

What accounts for this underwhelming and unevenly distributed technological gain?

Existential war vs war of choice
For the Taliban, the war in Afghanistan has been existential. Confronted with hundreds of thousands of foreign troops from NATO countries, and hunted on the ground and from the air, they had to adapt in order to survive. While the bulk of their fighting equipment has remained simple and easy to maintain (often no more than a Kalashnikov, some ammunition, a radio, and a headscarf), they have had to seek out new technology from other insurgent groups or develop their own.

One key example: roadside bombs, or IEDs. These simple weapons caused more allied casualties than any other. Originally activated by pressure plates, like mines, they had evolved by the midpoint of the war so that the Taliban could set them off with mobile phones from anywhere with a cell signal. Because the Taliban’s technological baseline was lower, the innovations they have made are all the more significant.

But the real technological advance for the Taliban took place at the strategic level. Acutely aware of their past shortcomings, they have attempted to overcome the weaknesses of their previous stint in government. Between 1996 and 2001, they preferred to be reclusive, and there was only one known photo of their leader, Mullah Omar. Since then, though, the Taliban have developed a sophisticated public affairs team, harnessing social media domestically and abroad. IED attacks would usually be recorded by mobile phone and uploaded to one of the many Taliban Twitter feeds to help with recruitment, fundraising, and morale. Another example is the technique of automatically scraping social media for key phrases like “ISI support”—referring to Pakistan’s security service, which has a relationship with the Taliban—and then unleashing an army of online bots to send messages that attempt to refashion the image of the movement.

For the coalition, things were quite different. Western forces did have access to a wide range of world-class technology, from space-based surveillance to remotely operated systems like robots and drones. But for them, the war in Afghanistan was not a war of survival; it was a war of choice. And because of this, much of the technology was aimed at reducing the risk of casualties rather than achieving outright victory. Western forces invested heavily in weapons that could remove soldiers from harm’s way—air power, drones—or technology that could speed up the delivery of immediate medical treatment. Things that keep the enemy at arm’s length or protect soldiers from harm, such as gunships, body armor, and roadside-bomb detection, have been the focus for the West.

The West’s overarching military priority has been elsewhere: in the battle between greater powers. Technologically, that means investing in hypersonic missiles to match those of China or Russia, for instance, or in military artificial intelligence to try outwitting them.

The Afghan government, caught between these two worlds, ended up having more in common with the Taliban than the coalition. This was not a war of choice but a fundamental threat. Yet the government couldn’t progress the same way the Taliban did; its development was hobbled by the fact that foreign militaries provided the main technologically advanced forces. While the Afghan army and police have certainly provided bodies to the fight (with many lives lost in the process), they have not been in a position to create or even operate advanced systems on their own. Western nations were reluctant to equip Afghans with cutting-edge weapons, fearing that they would not be maintained or might even end up in the hands of the Taliban.

Take the Afghan air force. It was provided with, and trained on, fewer than two dozen propeller aircraft. This enabled a modicum of close air support, but it was far from cutting edge. And working with the US meant that Afghanistan was not free to look elsewhere for technology transfer; it was, in effect, stuck in a stunted phase of development.

So what does this tell us? It says technology is not a driver of conflict, nor a guarantor of victory. Instead, it is an enabler. And even rudimentary weapons can carry the day in the hands of motivated, patient humans who are prepared—and able—to make whatever progress is required.

It also tells us that the battlefields of tomorrow might look a lot like Afghanistan: we will see fewer purely technological conflicts that are won by the military with the greatest firepower, and more old and new technologies fielded side by side. It already looks that way in conflicts such as the one between Armenia and Azerbaijan, and the pattern is one we may see more over time. Technology may not win wars anymore, but innovation can—particularly if one side is fighting an existential battle.

AfghanistanTalibanTechnological War
Previous ArticleHCL Tech, Munich Re in Pact To Digitalise Workplace Services in 40 NationsNext ArticlePassengers on a Plane in the US Evacuated After a Samsung Phone Reportedly Caught Fire