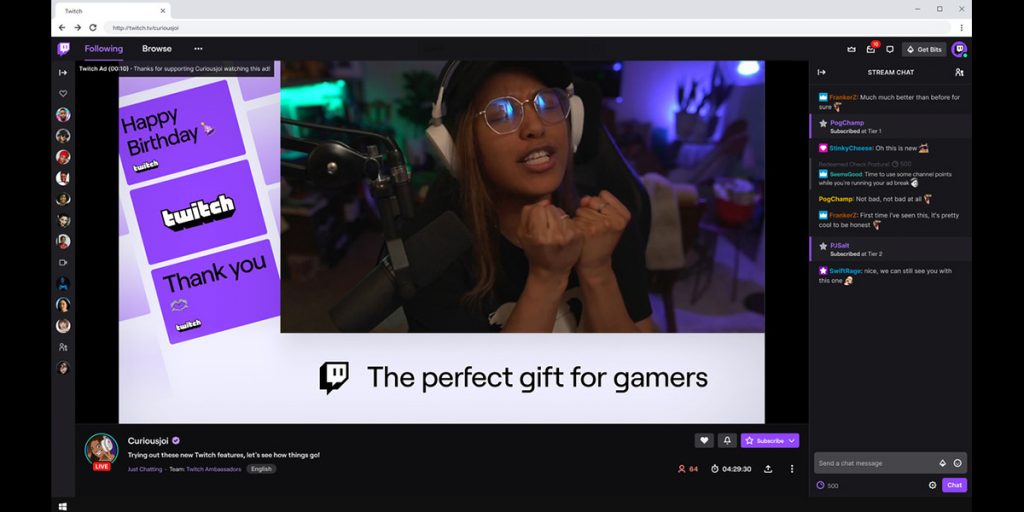 Twitch is changing up the way you see ads during streams. Today, the streaming giant announced a new ad format, Stream Display Ads. This new format will create a “less disruptive” ad that will allow viewers to continue watching and hearing their favorite creator without interruption.

In a post to Twitter, Twitch announced the experimental new Stream Display Ad with an example GIF of how they will work. The clip shows a Twitch stream that an ad emerges into. The ad scrolls up from the bottom, shrinking the video slightly, but not covering any of the video. The stream continues while the ad remains underneath. Once the ad is done, it simply scrolls back down, and the video re-formats to its original size. It is a less disruptive ad format, as promised. You can check out the GIF below to see them in action.

These new Stream Display Ads are 10-second display ads that will show on channels. Viewers will still be able to see and hear creators as the ad is shown, a big improvement from the previous ads that blocked a good portion of a video. Creators will not have to do anything different to use them. Though, Twitch did say that this new ad format is an optional feature that creators can opt-in or out of. Though, Twitch made it clear that creators will still receive ad revenue for each Stream Display Ad shown. After all, as the streaming giant pointed out, ads are an important part of the platform. An FAQ on the new ads can be found here.

This new experimental format was created from the feedback that Twitch has gathered from the community. In another Tweet, Twitch linked users to UserVoice, a Twitch platform that allows users to share their thoughts on the platform and request change. The link shows that the top idea for improving ads, with 1,722 votes from the community, was for Twitch to stop blocking videos with ads. Turns out many folks would get blocked by an ad as something exciting happened in a stream and would miss out.