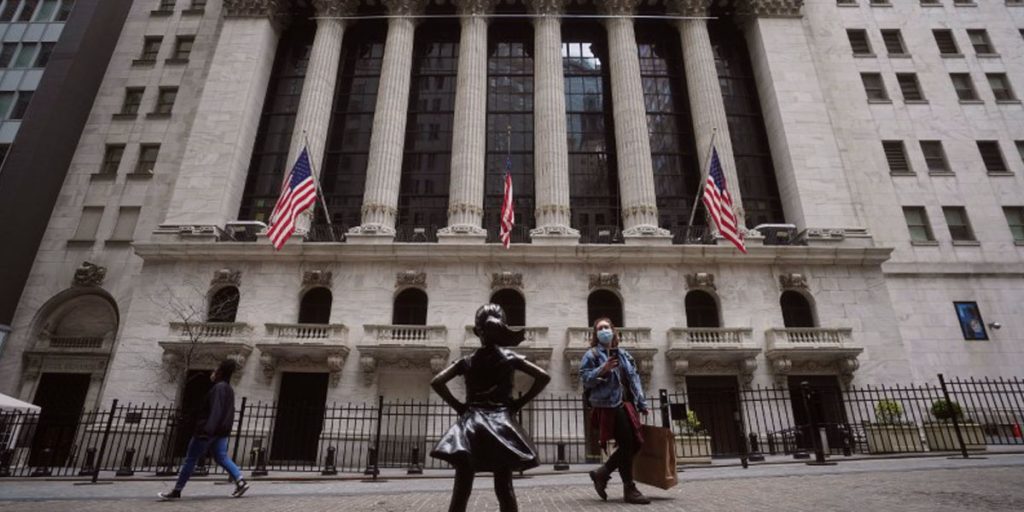 The Nasdaq jumped on Thursday, at one point approaching its lifetime intraday high set in April, as U.S. technology stocks gained on optimism around a speedy economic recovery.

The performance of the tech-heavy Nasdaq was in stark contrast to the S&P 500 and Dow, which slumped as investors reacted negatively to the Federal Reserve’s unexpectedly hawkish message on monetary policy on Wednesday.

Chipmaker Nvidia Corp jumped 5.4%, leading the charge among technology behemoths after Jefferies raised its price target on the stock.

Technology shares, which generally perform better when interest rates are low, powered a rally on Wall Street last year as investors flocked to stocks seen as relatively safe during times of economic turmoil.

The group has come under pressure this year on fears that rising inflation would lead the Fed to hike interest rates sooner than expected. The central bank on Wednesday moved its first projected rate increases from 2024 into 2023.

Still, shares of Apple Inc, Microsoft Corp , Amazon.com Inc and Facebook Inc reversed premarket declines to rise between 1.4% and 2% as investors bet that a steady economic rebound would boost demand for their products in the long run.

“Yes there is rising inflation but the market is focusing more on the positives of improving earnings, robust GDP growth and the wider economy getting stronger,” said Randy Frederick, vice president of trading and derivatives at Charles Schwab in Austin, Texas.

“Today’s action is indicative that the Fed hasn’t said anything that the market didn’t already know.”

The Nasdaq briefly advanced to within 16 points of its lifetime peak achieved on April 29, before pulling back a touch.

The strengthening dollar, another by-product of the previous day’s Fed news, pushed U.S. oil prices down from the multi-year high hit earlier in the week. The energy index, in turn, fell more than 3%, the biggest laggard among the 11 main S&P sectors.

Other economically sensitive stocks including materials and industrials fell 2.4% and 1.5% respectively, as data showed jobless claims rising last week for the first time in more than a month. Still, layoffs appeared to be easing amid a reopening economy and a shortage of people willing to work.

“In the balance of June and into the summer we anticipate continued volatility as we get more signals from economic data, Fed policy and as we get into the earnings season,” said Greg Bassuk, chief executive officer at AXS Investments in New York.