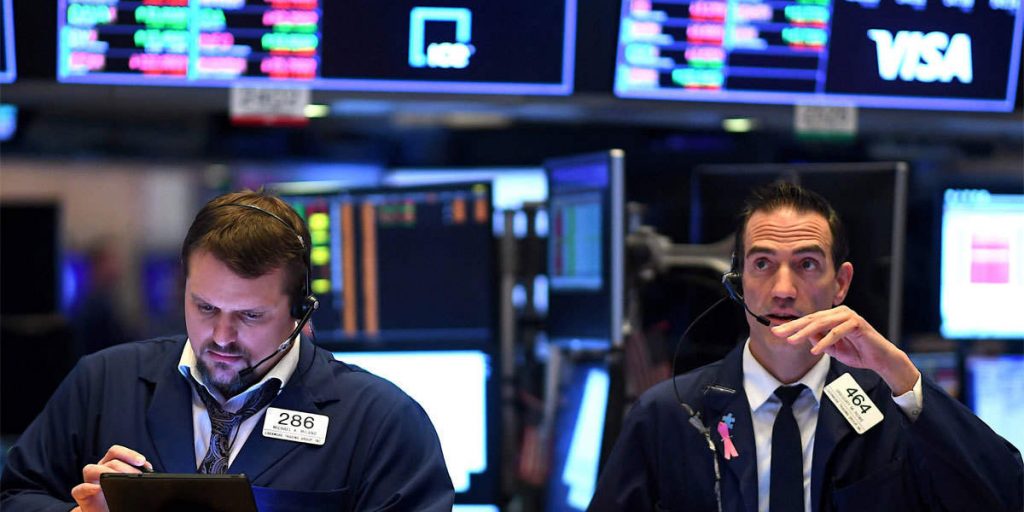 US shares slipped on Monday, falling from record highs last week as technology shares dragged indexes lower. Investors remain cautious over the slew of corporate earnings ahead as well as the ongoing vaccine rollout in the US.

Leading the downturn was Tesla, with shares falling as much as 6.5% following the fatal car crash in Texas Saturday, which left two people dead. The electric car maker was a big laggard on the S&P 500 and Nasdaq Composite Index.

The consumer and real estate sectors also weighed on the benchmark index trading as analysts and investors anticipate earnings from nearly 80 companies this week.

“Wall Street could be in for a few choppy trading weeks as more of the same strong earnings beats becomes the theme,” Edward Moya, senior market analyst at OANDA, said in a note. “The bar was set too low this earnings season, but then again no one really thought it was possible that the US would reach herd immunity by June”.

Moya said the financial markets will likely look to how the bond market is positioned, especially with no major economic data on the horizon. Given this, he expects the 10-year Treasury yield to rise towards the 1.70% level if economic recovery optimism remains strong, and to drop to the 1.53% level otherwise.

The 10-year Treasury yield climbed 3.2 basis points to 1.605% in the afternoon after rising to 1.617% Monday morning.
Bank of America said Treasury yields will likely climb to a two-year high this year despite recent stabilization.

“We think technical factors combined with revised expectations on US growth are mostly responsible for the recent stabilization in US rates,” said Bank of America in a note Monday. It added that the stabilization “subsequently justifies” a rally in emerging markets and US equities and a selloff in the US dollar.

Still, Ryan Detrick, chief market strategist for LPL Financial, is optimistic the stock market will come out of COVID-19’s shadows despite some concerns about the economy overheating.

“In the United States, vaccinations are increasing, the economy is expanding, unemployment is falling, and stimulus continues to flow through the economy,” he told Insider. “With the consensus crowding into an optimistic corner, many investors are wondering if sentiment may be running too hot”.

Shares of GameStop rose 6% as the company announced that its CEO George Sherman will step down on July 31 or upon the appointment of a successor. Shares were already up even before the company’s announcement, boosted by the company’s progress in making major changes led by activist investor Ryan Cohen.

Nvidia shares sank as much as 4% after UK regulators said they will probe the company’s proposed $40 billion takeovers of British chipmaker Arm over national security concerns.

Over the weekend, bitcoin slipped to 17% to its lowest since February but recovered on Monday, regaining some momentum to climb above the $55,000 level. Last week, the cryptocurrency hit an all-time high of over $64,000 on excitement over Coinbase’s direct listing.

But technical analyst Katie Stockton of Fairlead Strategies said bitcoin’s decline could set it up for further downside if a key technical support level is decisively breached.

“The 50-day (~10-week) MA is being tested, and we believe consecutive closes below it would increase risk of a test of support near $42,000,” Stockton said in a note.

China pivoted in its stance on bitcoin, calling the digital asset an “investment alternative” – a comment that Beijing insiders described as “progressive” – after years of cracking down on cryptocurrencies, CNBC first reported.