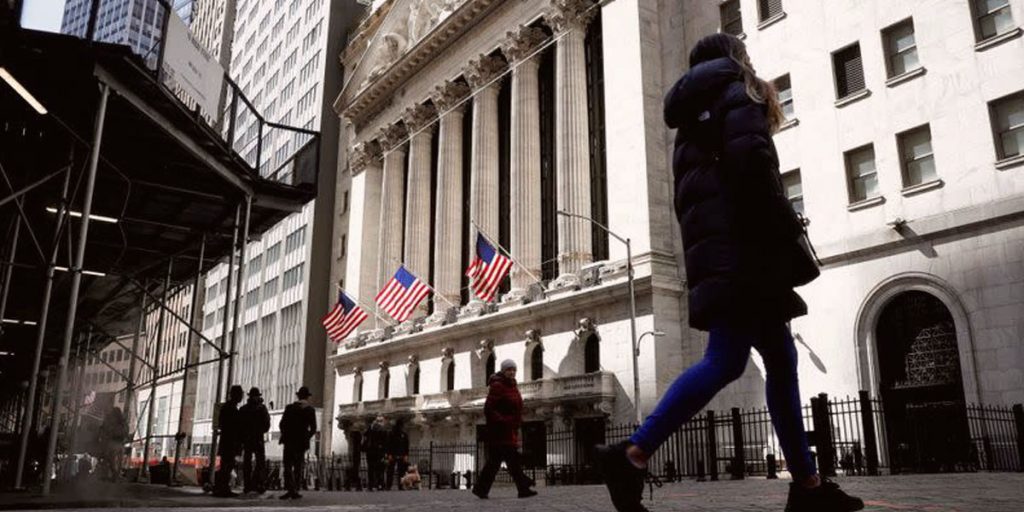 Wall Street was broadly under pressure on Thursday and European shares fell for the first time in two weeks on hawkish signals from the US Federal Reserve, even as US technology stocks notched gains.

The US dollar hit a two-month high and long-dated Treasury yields whipsawed, tumbling after initially spiking on Wednesday’s surprise move from the Fed to raise interest rates at a much faster pace than expected.

The Dow Jones Industrial Average closed lower for a fourth straight session, down 0.62 percent, as the S&P 500 slipped 0.04 percent.

The tech-heavy Nasdaq Composite neared its lifetime peak hit on April 29, before closing up 0.87 percent as investors bet the economic recovery would boost demand.

The Fed on Wednesday signaled it would now be considering whether to taper its $120 billion-a-month asset purchase program meeting by meeting and downgraded the risk from the pandemic given to progress with vaccinations.

Traders are “again buying Treasuries and technology stocks as the market continues to believe that, despite yesterday’s Fed meeting, the central bank is still planning on keeping interest rates near zero or extremely low for another 18-24 months,” said Chris Zaccarelli, a chief investment officer of the Independent Advisor Alliance in Charlotte, North Carolina.

Two-year and five-year notes, the most sensitive to interest changes, saw the largest yield increases on the hawkish Fed move.

Long-dated yields dropped as traders who were betting on the yield curve scrambled to cover their trades. Yields on 10-year bonds matched Wednesday’s high of 1.594 percent before retreating.

“It appears that faster progress toward reopening and higher inflation surprises revealed some hawks on the FOMC, but we suspect that leadership is predominantly anchored at zero or one hike in 2023,” JP Morgan said, sticking with a prediction for tapering to start early next year.

Some are beginning to expect the Fed to dial back purchases sooner. Bond giant Pimco’s US economists said the tapering plan might now be announced as soon as September, and that it would take roughly six to nine months to wind down the stimulus.

Increasingly confident in the US economic recovery, the Fed is seen most likely starting to taper in January, according to a Reuters poll.

“Given another strong rise in the upcoming May core PCE data, July’s FOMC could well bring a very hawkish outcome to this talk, especially if non-farm payrolls for June are over 1 million and prior months are revised up significantly,” John Vail, chief global strategist at Nikko Asset Management, said in a market note.

The dollar broke out of recent tight ranges, surging to a two-month high as it extended Wednesday’s 0.9 percent increase against a basket of currencies.

Powell’s hawkish turn prompted Goldman Sachs and Deutsche Bank to abandon their calls that the US currency would weaken against the euro, although others were not sure.

Agnès Belaisch, the chief European strategist of the Barings Investment Institute, said that the Fed was not going to lift rates any time soon was good for world growth and that FX markets would get over Wednesday’s shift.

“He (Powell) said they wouldn’t do anything for the next two years, so it’s a shock but wrapped in good news,” Belaisch said.”I think he gave the markets the all-clear to rally”.

The euro fell to $1.19035 from just over $1.20 in the Asian session after touching the lowest since mid-April.

Oil prices toppled from their highest levels in years on Thursday, pressured by the dollar’s gains. The stronger dollar makes greenback-traded commodities more expensive to holders of other currencies.

Precious metals sold off on Thursday. Spot gold dropped 2.2 percent. US gold futures settled down 4.6 percent at $1,773.80 an ounce after slumping to their lowest since late April.