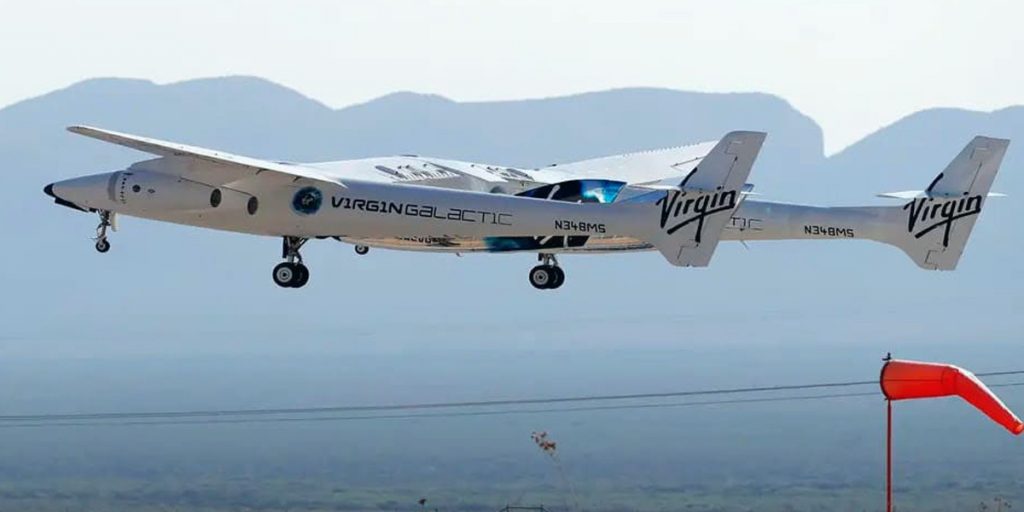 British billionaire Richard Branson completed his latest, and arguably greatest, adventure Sunday with a brief flight to the edge of space aboard his Virgin Galactic spaceplane. The flight marks not only Branson’s first trip to space but the first time Virgin has flown a full crew cabin as well. Hundreds of invited guests and members of the media watched from the desert floor below at New Mexico’s Spaceport America as the double contrail drawn across the sky by carrier aircraft VMS Eve was suddenly overshadowed by a third white plume emanating from SpaceShipTwo Unity’s rocket engine. The pair lifted off together around 8:40 a.m. MT (7:40 a.m. PT) and 45 minutes later Unity detached from Eve and fired its motor for just under a minute to reach speeds in excess of Mach 3.

Viewed from the surface, a diffuse but distinct white line could be seen rapidly painting almost perfectly vertically, pointing quite literally to the heavens. Branson called it the “experience of a lifetime” in a staticky radio transmission from Unity as it began to glide back to Earth. The craft then returned for a picture-perfect landing near the same spot VMS Eve launched from almost exactly an hour earlier. “Welcome to the dawn of a new space age,” the 70-year-old Branson said later from the tarmac of Spaceport America. VMS Eve is named for Branson’s mother, Eve, who died due to COVID-19 complications in January. “She held on for one last victory, managing to fight off the virus, but had expended all of her energy in the process,” Branson wrote in a blog post citing her as a major inspiration and force behind his career. “She took glider lessons disguised as a boy, enlisted in the WRENS (Women’s Royal Naval Service) during World War II … she was inventive, fearless, relentless — an entrepreneur before the word existed.”

Unity made it to an estimated altitude of about 53 miles (86 kilometers) above the surface of the Earth. Some will quibble that this is lower than the commonly accepted definition of space, which begins at a nice, even 100 kilometers (62 miles). However, the US military and NASA set the dividing line at 50 miles up (80 kilometers), so it’s all clearly a little subjective. And for the purposes of space tourism, you get to experience weightlessness and look down on our home planet set against the black void of space from either altitude. Before taking off, Branson said he would be “looking back at our beautiful Earth and taking it all in and realizing that only 500 other people [actually it’s 570, as of Saturday] have done this.”

Also on the flight was Virgin’s chief astronaut instructor Beth Moses, the only person to have previously ridden in SpaceShipTwo’s passenger cabin, in 2019. The company’s lead operations engineer Colin Bennett was on board along with Sirisha Bandla, vice president for government affairs. Bandla tended a research experiment from the University of Florida involving plant biology’s adaptation to microgravity. “The VG flights offer, for the first time, the ability to actively monitor experiments during launch and the initial entry into space. This ability to study biology that experiences launch and then microgravity is, perhaps surprisingly, a radically new development,” Rob Ferl, principal investigator for the experiment and a professor of horticultural sciences, said in a statement. “Previously all experiments had to wait until the spaceship was in orbit before the experiment could be monitored.” The two Virgin Galactic pilots at the controls of Unity were Dave Mackay and Michael Masucci, with former NASA astronaut CJ Sturckow and former NASA research pilot Kelly Latimer flying VMS Eve.

Branson has always been an adventurer and thrill seeker. His many adventure exploits include long-distance hot air balloons and trans-Atlantic sailing voyages. He is the oldest person to kitesurf across the English Channel. Once back on solid ground Branson announced that Virgin would be giving away two seats on an upcoming flight through an Omaze contest that also encourages donations to benefit the nonprofit Space for Humanity, which says its goal is “democratizing space and developing solutions to world problems through the increasing of human awareness.”