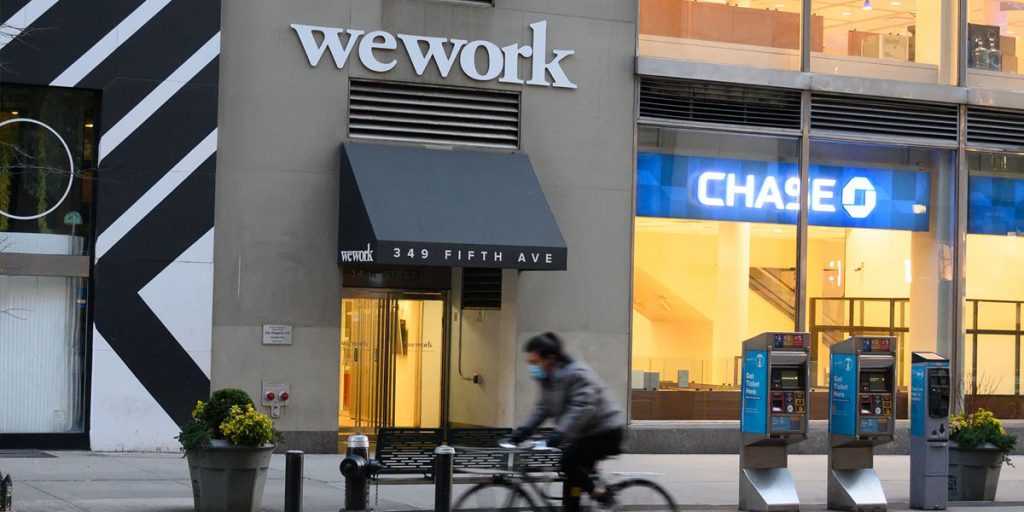 Office-sharing startup WeWork has posted a $2.06bn (£1.45bn) quarterly loss after being hit hard by Covid-19.

The announcement comes as WeWork prepares for its stock market debut.

The company’s first attempt to go public collapsed in 2019 over concerns about its business model and co-founder Adam Neumann’s leadership style.

Since Mr. Neumann’s exit, the company has gone through a major shakeup that has seen significant job cuts and businesses sold off.

The business felt the impact of the pandemic particularly hard as social distancing rules drove a surge in people working from home and concerns about infections saw workers avoiding shared office spaces.

WeWork, which is backed by Japanese tech giant SoftBank, said its first-quarter revenue almost halved from a year ago to $598m.

But the firm said people are now returning to its offices as coronavirus restrictions are eased.

Its occupancy rate edged up to 50% in the most recent quarter, compared to 47% in the previous three months.

The company also said it expects the change in working habits to increase demand for the kind of short-term leases it offers.

media captionHow can a company be valued at billions, but not make any profit?

In March, WeWork said it would finally see its shares start trading on the stock market, through the purchase by the publicly traded BowX Acquisition Corp.

BowX is a so-called special purpose acquisition company, a shell firm that uses proceeds from a public listing to buy a private firm.

The firm is led by the owner of the NBA’s Sacramento Kings and affiliated with basketball legend Shaquille O’Neill.

The deal valued WeWork at $9bn – roughly a fifth of its estimated worth in 2019 before its earlier flotation effort spectacularly imploded.

Investors had raised questions about the company’s finances and how the business was being managed by founder Adam Neumann, who then left the firm.

After plans to list the company was shelved, WeWork restructured the business.

It closed around 100 locations, pulled out of non-core ventures – including a dog walking app and a wave pool maker – and now has just a third of the employees it did in mid-2019.

The company said it incurred restructuring costs of $494m, including its settlement with Mr. Neumann. It posted an impairment charge of $299m partly due to an exit out of some real estate.

In February, WeWork’s backer, SoftBank, and Mr. Neumann reached a settlement to end a legal battle that started in 2019.